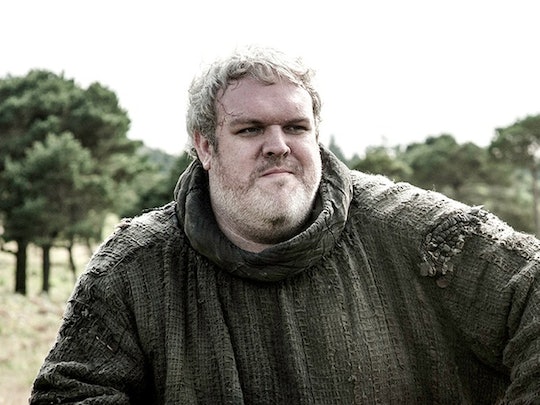 What Happened To Hodor On ‘Game Of Thrones’? His Childhood Raises Lots Of Questions

If there is one character on Game of Thrones who we have come to have an extremely soft spot in our hearts for, it's easily Hodor. But with the surprise bit of backstory we saw for the first time ever on Episode 3 of Season 6 of Game of Thrones, it has fans wondering what happened to Hodor to make him the way he is now? Thanks to Bran and his first vision of the season, we now know that Hodor wasn't always unable to speak anything other than his "name" and for that matter, we now know that Hodor has a real name — Wyllis.

Wyllis also used to be a stable boy with every capability of becoming a great fighter, but was urged against it and rightfully so. The gentle giant he is kind of suits him, right? But what happened between his teen years in Winterfell, working as a stable boy close to the Starks, and now, being unable to speak anything but is non-name? As with most of the good people in Westeros, we can assume that something awful happened to Hodor to make him the way he is now.

Obviously nothing as drastic as having his tongue cut out, though I wouldn't put that past pretty much any of the inherently bad guys and gals of Game of Thrones, but maybe the stable boy formerly known as Hodor saw something he wasn't supposed to see, or was tortured by some of the more hardened Winterfell-ians. Maybe he was so ridiculed and hurt by one, possible named Hodor, that Wyllis could, from then on, only say his assailant's name. Stranger things have happened in Game of Thrones. We're looking at you, white walkers.

It's also safe to assume that Hodor has got to be even older than Bran than we'd already figured, since he was already much older when Ned Stark himself was just a boy sparring in the courtyard of Winterfell. So his age alone affords us some proof to the idea that Hodor, a.k.a. Wyliss, has seen a lot of horrible things in his years in the north.

But just getting a glimpse into Hodor's childhood isn't enough, and just makes fans want to know more. As Bran's right hand man and, essentially, a caretaker in some way, Hodor has always been more important to the story than most and now, more than ever, we need some Wyllis/Hodor backstory.