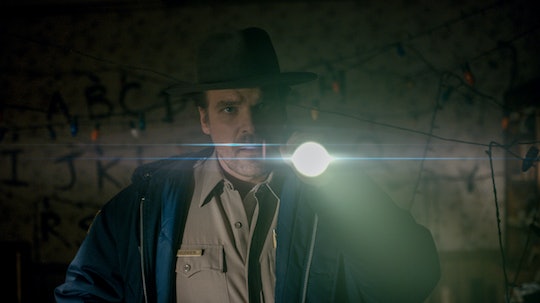 What Happened To Hopper's Daughter On 'Stranger Things'? The Little Girl Met A Tragic End

(Warning: This post contains spoilers through Episode 8 of Stranger Things.) Stranger Things, the next surefire Netflix hit series, has no shortage of tragedy. The season centers on the mysterious disappearance of Will Byers, a young boy who vanishes into thin air after a terrifying encounter with an otherworldly beast. Other disappearances soon follow, as the entire town of Hawkins, Indiana grapples with the dark forces stealing away their inhabitants. Chief Hopper, played by David Harbour, is one of the characters at the forefront of the mystery. He teams up with Will's distraught mother Joyce (Winona Ryder) to find her son and unravel the mystery of what exactly is going on in Hawkins. But Hopper has his own tragic backstory to contend with – his young daughter passed away several years before the beginning of the series' events. But how did Hopper's daughter die on Stranger Things? As it turns out, her death is a far more realistic horror than the supernatural one depicted in this season of the show.

All season long, we see Hopper grapple with his grief, numbing himself and repeatedly blacking out because of his drug abuse. In an interview with MovieFone prior to the series' debut, Harbour clarified what he believed to be his character's motives in abusing drugs and alcohol, stating that he thought "the only apology [Hopper] feels he can make to [his daughter] is to kill himself slowly." In the earliest episodes of the season, we even hear Hopper avoid telling the local schoolteacher that his daughter died, instead lying to the man and telling him that she lives with her mother, not in Hawkins.

Despite the specter of his daughter's demise (figuratively) haunting Hopper all season long, it takes us until the season finale to discover the exact nature of Hopper's tragedy. In Episode 8, as Hopper and Joyce journey through the mysterious "Upside-Down" alternate dimension to recover Will, Hopper repeatedly flashes back to the time leading up to his daughter's death. We see her playing with him one minute, a happy little girl, and the sudden deterioration as she begins showing symptoms of cancer.

One of the flashbacks is precipitated by Hopper spotting a stuffed bear, in Will's fort in the Upside-Down, that looks suspiciously like his daughter's. Could that be a hint that the little girl's spirit is somehow trapped in the Upside-Down?

Hopper's flashbacks in the finale take us through the entire lead up to her death, with his little girl undergoing chemotherapy, all the way through the moment that she eventually passes away in the hospital. The flashback to his daughter's demise is beautifully juxtaposed with Hopper resuscitating Will in the present, implying that Hopper saving Will has somehow "redeemed" him for his perceived inability to save his own child.

Though the season doesn't end on an all-around happy note, Hopper's arc concludes on a vaguely uplifting one, as he perhaps begins to "forgive" himself for his daughter's death and realize that killing himself slowly is not the answer. I hope that we get a second season of this amazing series to see Hopper's journey continue – and to address the possibility that the Upside-Down could potentially be harboring inhabitants like his deceased daughter.