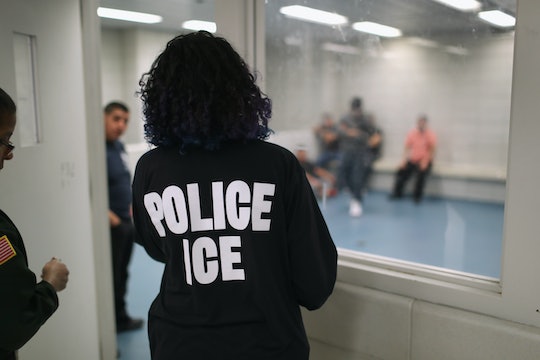 Several Hundred ICE Detainees Are Still Being Held In Mississippi

Communities across Mississippi are continuing to grapple with the aftermath of what is believed to have been the largest statewide worksite immigration raid to have ever been conducted. Earlier this week, U.S. Immigration and Customs Enforcement (ICE) officers detained 680 unauthorized workers in a series of coordinated raids on agricultural processing plants, leaving a number of children without a parent or guardian to care for them. But what happened to ICE detainees in Mississippi raids? Some 300 are reported to have been released.

According to CNN, at least 377 people were reported by Jere Miles, special agent in charge for the Department of Homeland Security, to still be in custody as of Thursday evening.

In a statement released Wednesday, ICE confirmed it had executed multiple federal criminal search warrants at seven agricultural processing plants spread across Mississippi, detaining some 680 people they charged were found to be "unlawfully working" at the plants. Acting ICE Director Matthew Albence later told the Associated Press that Wednesday's raids were likely the largest worksite operation ever conducted by the agency in a single state.

As a result of the raids, a number of shocked children across the state were reported to have been left stranded at schools and, in some cases, even temporarily homeless. In Forest, Mississippi, CNN affiliate WJTV found that dozens of children were housed overnight in a local community gym after being found stranded outside their homes or schools by strangers and neighbors.

On Thursday, the U.S. Attorney's Office for the Southern District of Mississippi claimed immigration agents had attempted to provide detainees with the means of arranging childcare for children who would be stranded without a caretaker. "All those detained yesterday were asked when they arrived at the processing center whether they had any children who were at school or childcare and needed to be picked up," their statement read. It went on to claim that detainees were given access to cellphones in order to contact family members and make childcare arrangements. Ten cellphones were made available to all 680 detainees, Mississippi Today has reported.

It remains unclear if or when the remaining detainees will be released.