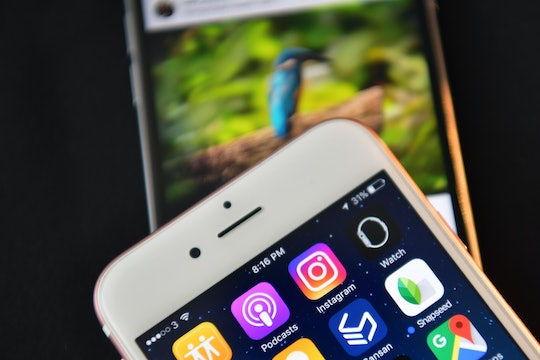 Don't Worry Guys, That Instagram Update Everyone Freaked Out About Was Just A "Bug"

For a brief moment on Thursday, Dec. 27, people thought it might be time to say goodbye to the greatest past-time of the last decade: scrolling through your Instagram newsfeed. Since Instagram first began gaining popularity nearly 10 years ago, the trademark feature of the app was your ability to easily continue to scroll through posts, meaning there was never an end to new content. However, an accidental update released today for a hot minute had many asking: What happened to Instagram's scroll and will this change creep up again?

Some users were greeted with an update message when they opened their apps this morning, stating that there's a new way to interact with your newsfeed, as The Independent reported. "Introducing a new way to move through posts," the screen first reads. "Tap through posts, just like you would stories," it says, before directing users to tap the righthand side of the screen to see the next post.

Instagram did not immediately respond to Romper's request for comment regarding the new format, Adam Mosseri, an executive at Instagram, tweeted that the update was actually a mistake. "Sorry about that, this was supposed to be a very small test but we went broader than we anticipated," he wrote.

Though it wasn't directly addressed, it seems clear Mosseri is aware that many users already seem to be pretty unhappy with the change. "Worst update ever. @Instagram just ruined Christmas. It doesn't matter that it already past... THEY STILL RUINED IT," read one response. "I'm freaking out I hate this," read another.

Instagram also took to Twitter today to address the "bug," writing: "Due to a bug, some users saw a change to the way their feed appears today. We quickly fixed the issue and feed is back to normal. We apologize for any confusion."

However, the update shouldn't come as a complete shock, given that the company has been transparent about testing out the new feature for months, on top of the fact that they regularly roll out updates that change the interface to varying degrees.

Back in October, a handful of selected users were introduced to the "tap to scroll" feature, according to Fortune, as Instagram tends to test these changes on small groups before making them permanent for all users. At the time, Fortune reported that the "tapping" was inspired by the incredible success of the stories feature, which is essentially a play on the concept of Snapchat, and has since also been introduced to Facebook, which owns Instagram.

Later, a spokesperson for the company told TechCrunch: “We’re always testing ways to improve the experience on Instagram and bring you closer to the people and things you love," though they did also note that making the tap to scroll a permanent feature wasn't "something [we're] actively thinking about right now." It seems that in the past few months, that has changed.

In addition, TechCrunch noted that the change may have been inspired by a feature rolled out for viewing videos on the "explore" page. When you're finished viewing a video there, it automatically jumps to the next one. The equivalent of that with photos would be a tapping feature, similar to the stories.

Considering all of this, it seems that Instagram very well may have gathered enough data to feel that a tapping scroll was more effective than the vertical style we're used to, but of course, it's impossible to say right now. Regardless, it's clear that people have some pretty strong feelings about the accidental update, and right now, they largely seem negative. It's hard to say now whether this is just resistance to change — as people often experience — or an actual grievance with how the app has structured its user experience.

Either way, only one of two things can happen from here: Insta keeps on with the classic scroll, or we'll all have to get used to tapping our hearts out... I guess we'll have to wait and see what happens.