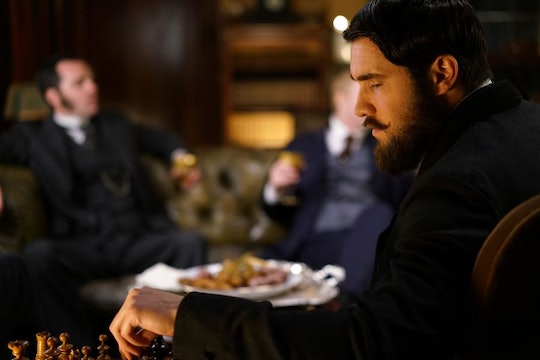 Jack The Ripper Is Coming To ABC

If you like serial killers, time travel, and a little romance, you'll love ABC's new sci-fi drama Time After Time. The series follows author H.G. Wells (Freddie Stroma), who builds a time machine that his friend Dr. John Stevenson (Josh Bowman) uses to escape to present-day New York City. It turns out his friend is actually notorious serial killer "Jack the Ripper" and Wells must follow him to the future to stop him from killing more people. Both Wells and Jack the Ripper were actually real people, but while Wells' history is well known, many may be wondering what happened to Jack the Ripper? The truth is no one really knows.

Between August and November 1888 there were five brutal murders that took place in the Whitechapel area of London. The killer was then named Jack the Ripper, who became known for killing female prostitutes and horribly mutilating them in the process. The murders began with Mary Ann Nicholls on Aug. 31, which was then followed by Annie Chapman, Elizabeth Stride, Catherine Eddoweson, and Mary Jane Kelly. These five are often referred to as the "canonical five" Ripper murders, though some believe Martha Tabram, who was stabbed to death on Aug. 6, 1888, was actually the first victim, making Jack the Ripper's total kills six, rather than five. (Suffice to say, he was not a nice guy.)

However, his actual identity was never discovered — though there was (and still is to this day) much speculation around who it could have been. According to The Whitechapel Murders History Resource, John Pizer, who was known as the "Leather Apron," was a suspect for some time, however he had airtight alibis during the murders. After the death of Chapman, the Divisional Police Surgeon Dr George Bagster Philips believed that the killer had anatomical knowledge. This led many to believe the killer was a doctor or butcher.

The number of theories about who Jack the Ripper could be are almost endless. There's even one theory that suggests Queen Victoria's grandson, Prince Albert Victor, also known as the Duke of Clarence, was the murderer, though the evidence is insubstantial. So you see, it's impossible to know what became of Jack the Ripper since we have no idea who Jack the Ripper actually was.

The truth is we probably will never know for sure, which is what makes Time After Time so interesting. It gives a face to the name as well as a backstory. While it's totally implausible that he got into a time machine and came to present-day New York City, it will be interesting to see how this killer's mind works and what kind of havoc he unleashes in the modern world.