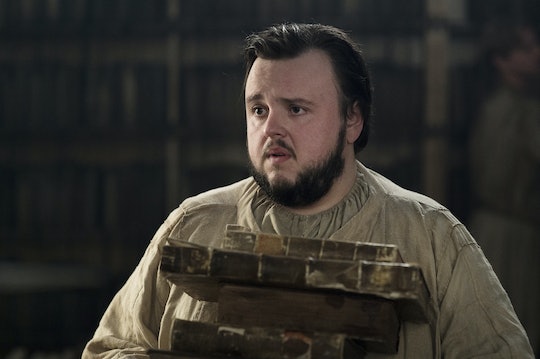 What Happened To Jorah On 'Game Of Thrones'?

The last time we saw Ser Jorah Mormont, affectionately known by Game of Thrones fans as Ser Friendzone, his beloved Daenerys Targaryen had sent him away with an order to find himself a cure for his greyscale. (Sure, no big deal.) Thanks to the Season 7 premiere, we now know he's in the best care he could possibly have found. So what happened to Jorah on Game of Thrones? It turns out he's at The Citadel.

Jorah contracted greyscale back in Season 5, when he and his prisoner Tyrion Lannister were traveling through Old Valyria on their way back to Daenerys. Jorah believed that if he could deliver Dany a Lannister, he may earn his way back into her good graces. (Poor, weirdly-love-stricken-by-a-teenager Jorah.) Unfortunately, while traveling through the deserted islands, they happened upon the very reason the islands are deserted — they were beset by Stone Men, or men whose whole bodies have been taken over by greyscale and who have subsequently gone mad. They're essentially just living zombies who can pass on their disease with a mere touch. Jorah and Tyrion barely escape with their lives. While Tyrion remains unscathed, however, Jorah comes into contact with one of the Stone Men, contracting a tiny spot of the disease.

Instead of doing something reasonable, like finding a treatment for the fast-spreading disease, Jorah continued on his merry way to find Daenerys and delivered the goods — or in this case, the imp. And we know by now that Tyrion has become the Hand of the Queen, and may in fact be even more closely related to her than that. But Jorah wouldn't let his Queen come anywhere near him. When he finally revealed to her that he's been touched by greyscale, the disease has already spread across his forearm.

"You swore to obey my commands for the rest of your life," she said to him. "Well I command you to heal yourself, and then return to me."

And so off Jorah went, in search of a cure for an incurable disease. The only other character we know who survived with greyscale is the now-deceased Shireen Baratheon, who contracted it as a child and whose noble parents had the resources and access to stop the disease in its tracks — just not before horribly scarring her. Jorah apparently now lives among the sick in The Citadel, where the maesters are presumably working on a cure for him, too. We hear him confront Samwell in the season premiere as he comes to collect his plate of food.

"Has she come yet?" Jorah asked. "The dragon queen, Daenerys Stormborn."

Of course, the next scene is Dany arriving on the shores of her ancestral homeland Dragonstone, so word should be reaching The Citadel promptly that the Mother of Dragons is indeed back in Westeros. As for Jorah, his entire arm looks like a scaly dragon claw, so it doesn't seem like he's any closer to a cure. But he is still alive, for now.