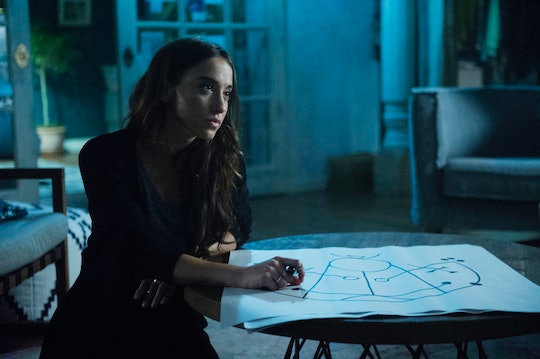 Julia Wants Revenge On 'The Magicians'

It feels like an eternity since we last checked in with our favorite Brakebills gang, but now that the Season 2 premiere of The Magicians has finally made its debut, it's clear that these characters have a very dark and dangerous journey ahead of them, but none more so than Julia. At the end of Season 1, Quentin's BFF made a deal with the Beast, offering to spare his life (for now) if he were to help her take down a god. But what exactly happened to Julia on The Magicians to make her so desperate for revenge? If you found yourself a little confused about what was going on, here's a bit of a refresher.

During the Season 1 finale, Julia's memories had been tampered with because she didn't want to remember the horrible thing that she was forced to experience. But when Ember removed the spell — not knowing it was put there at Julia's request — it was revealed that a trickster god called Reynard had appeared and murdered all of Julia's friends during their attempt to summon a god. He then proceeded to not only inhabit the body of Julia's love interest, Richard, but also went on to rape her in truly heartbreaking scene.

It's no wonder Julia didn't want to remember, but because she had, that led her to decide to use the Beast for her own means since he already has experience taking on gods. It was a bold move to make, for sure, but one that I honestly can't blame her for making. This character has continually been put through so much. It'd be great to see her get some justice for once.

Granted, I'm sure Reynard isn't going to make it easy. But the Beast does seem intent on helping her not just because they made a binding agreement, but also because he sees part of himself in her. Don't forget that he too was the victim of sexual assault, so they have more in common than you'd think. That's not to say that he isn't still just out for himself, but there's an interesting connection between the two of them at play here, which I'm eager to see develop more throughout the season.

Who knows if the Beast is going to be able to take Reynard down, but he's the best resource Julia has got for now. But if her determination and strength is any indicator, this god doesn't stand a chance.