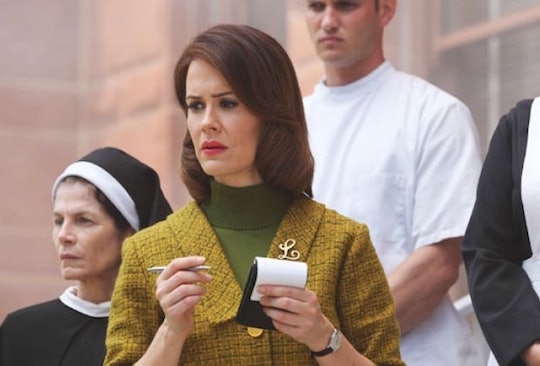 What Happened To Lana Winters On 'AHS: Asylum'? Sarah Paulson's Character Was A Survivor

In the finale of American Horror Story: Roanoke, an iconic character from the show's past will be appearing for the first time since Season 2: Lana Winters, the tough as nails reporter from Asylum who survived every obstacle thrown her way. Bringing back a Sarah Paulson character from earlier seasons for the finale seems to be something of a new tradition for the show; Hotel brought back Season 1's Billie Dean Howard for a single episode, and now Roanoke is reintroducing Lana Winters. But it's been so long since she appeared on our television screens that you may be wondering: what happened to Lana Winters on AHS: Asylum?

Lana had a hellish journey over the course of Season 2, but she only seemed to get stronger the more she suffered. She started off as a tenacious but under-appreciated reporter who was willing to do anything to get her story, and she was certainly tested as she chased the truth behind the serial killer, Bloody Face. Lana's journey took her from the halls of Briarcliff to a murderer's basement, but she emerged from all of it and made a new life for herself in the aftermath. Now she's going to give the interview of her life with Roanoke's Lee, and both women are uniquely positioned to understand one another. They've both lived through the unimaginable.

When AHS: Asylum began, Lana was living with her schoolteacher girlfriend, Wendy, and writing puff pieces for the local paper. She wanted more from her career and seized her opportunity when Kit Walker, the man arrested for the notorious Bloody Face murders, was brought to the mental hospital of Briarcliff Manor. Lana decided to sneak into the asylum to see what she could find out, like a much more hardcore Nancy Drew. Instead, Sister Jude, the nun running Briarcliff, vindictively had Lana committed for being a lesbian, which left Lana trapped inside the confines of the asylum.

Her nightmarish living situation only got worse. The methods at Briarcliff were often inhumane and the staff all had their own dark secrets, though Lana did form a bond with visiting psychiatrist Dr. Oliver Thredson. She was even forced to endure conversion therapy in one of the show's most horrifying sequences to date in an effort to be granted an early release. When that didn't work, Thredson agreed to help Lana sneak out. However, upon arriving at his home, Lana quickly realized that something was horribly wrong.

Lana had been fixated on the idea that Kit was Bloody Face, but Thredson was actually the killer the whole time. As his captive, Lana was subjected to all manner of horrors, including a rape that left her pregnant. She used every skill she had to convince Thredson that she was on his side, so that when the right moment came she could strike. She was able to overpower him and escape, but it was always one step forward, two steps back for Lana: she got out, but she just ended up back at Briarcliff.

Luckily her second stay at the asylum was a relatively brief one, though it was eventful. Lana was able to hold Thredson captive in a storage area and even acquire a recording of him confessing to his crimes. He got out of his makeshift prison, but with the help of the Mother Superior, Lana finally left Briarcliff for good with her evidence and turned Thredson in to the police. But seeing Thredson thrown in jail wasn't enough justice for Lana. She killed him herself.

After her ordeals, Lana attempted to salvage her life. She intended to have an abortion, but the procedure triggered her PTSD and she panicked, choosing instead to carry the baby to term before giving him up for adoption. After that, Lana found the career success she'd always longed for. She wrote a book about her experiences called Maniac that skyrocketed her to fame and then she exposed Briarcliff's horrors in a documentary. She achieved all of her dreams, but her past put one final wrench in her plans.

During an interview about her impressive career, Lana's then-adult son reappeared. He'd been carrying on his father's work (i.e., of the murder variety) and he was there to kill Lana, too. But he was dealing with the wrong woman: Lana pretended to comfort him, much like she did with Thredson, and then she shot her son in the head.

Lana was the ultimate survivor, so it makes sense that she's the one to give Lee's finale interview. Lana has made incredibly tough decisions and lived with the consequences, giving her unusual insight into everything Lee has been dealing with all season. These two women going head-to-head will be a television event no viewer will ever forget.