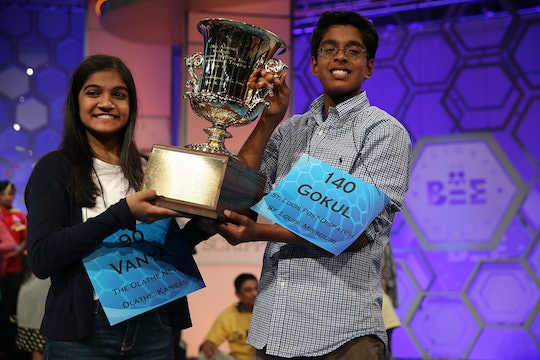 What Happened To Last Year's Scripps Spelling Bee Winners? They're Keeping It Real

I don't know about the rest of you, but I think spelling bee champions are the most hardcore kids in the entire world. The winners get some $50,000 in combined cash prizes and this Friday, another teen (or child) will get more money for spelling a really hard word than most of America will make in a year. But what then? What are last year's Scripps Spelling Bee winners doing now? Let's not get too excited. These kids are, well, just kids. They're in school.

Last year, in a crazy turn of events, there was a tie at the Spelling Bee. This is not the Kentucky Derby, or the Super Bowl, and in a strange turn of events, both spellers shared the prize. In 2015, Gokul Venkatachalam and Vanya Shivashankar both won the spelling bee. They went head to head spelling words like, "thamakau," "nunatak," and "sprachgefühl" (how did he know there was an umlaut?) until the Scripps rules called it. They both won.

If Gokul had faltered on "nunatak,' Vanya would've taken the prize. They used up all 25 of the championship words in ten rounds, and let us all thank the spelling gods that there's a limit to how long this contest can go on.

Both eighth graders returned to their respective hometowns triumphant. Right after winning, both Vanya and Gokul went back to school and back to their normal lives. They're in ninth grade now and have a lot more to handle than spelling bee fame. Like homework and homecoming dance dates.

Vanya's older sister Kavya, was also a Scripps Spelling Bee winner in 2009, so she had some big shoes to fill. Luckily, the pressure from her family wasn't totally insane. Her sister, now a pre-med student at Columbia University, told The Kansas City Star, their hometown paper, that she wasn't able to help her little sister in the contest.

"My spelling knowledge has definitely deteriorated since 2009,” she said. She added that even some of the words given to her sister were tough. "I’m sitting here and I’m like, ‘Oh, gosh, I have no idea how to spell this,’" she said at the time. Thanks a lot, sis.

On the other end of the spectrum, Gokul was all about milking his spelling bee triumph in the best of ways. He, in addition to being an avid speller, is also a sneaker head. He buys them online and loves the fact that kids at school thinks he's a geek until they see his kicks. The teen told GQ that he wanted the magazine to make sure everyone in the right places knew he wanted a Nike or Jordan endorsement. Adorable. That has not happened (yet... Nike, get on that!).

For now, both past contestants seem to be keeping a pretty low profile — likely studying their butts off to get into college, killing it in AP classes, and trying not to spell out out their cafeteria lunch orders (probably F-A-K-E M-E-A-T). Let's hope they've saved their $35,000 a head as shared winners from last year. Ivy League schools aren't cheap and these whiz-kids are bound to get into at least one.