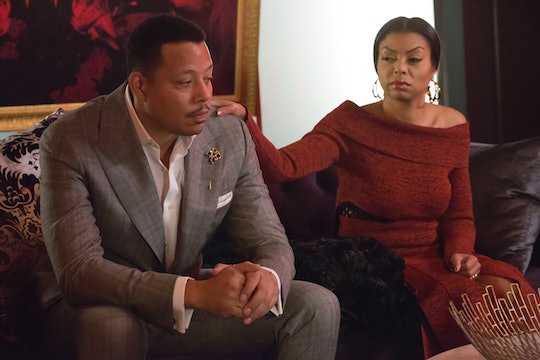 What Happened To Lucious Lyon's Mom On 'Empire'? Leah Walker Finally Gets An Explanation

Throughout this season of Empire we've learned more about Lucious' mother, Leah Walker – well, we thought we were, anyway. According to Lucious, his mother suffered bipolar disorder. Not only did she abuse him as a child, but he said that she committed suicide in front of him. This was all the subject of his song and music video "Boom Boom Boom Boom," which he happened to direct. These past few episodes, however, we've seen glimpses of a woman that might be Lucious' mother. On Wednesday night, it was confirmed to be her. So, what really happened to Lucious Lyon's mom?

Earlier this season, we've seen an older woman in a nursing home thought to be Leah. Both Thirsty Rawlings and Andre visited her. At the end of the last episode, she showed up to Empire. This pretty much verified that Lucious lied about his mother's death. Why did he lie? Besides the fact that Lucious is not to be trusted about anything, he had his reasons. According to Lucious, many details from his stories were true: his mother was abusive, and attempted to kill herself in front of him – unlike his original story, however, he revealed that the gun had no bullets.

Since Leah lived from her suicide attempt, what happened to her? Lucious said she was then "locked up" for years. During President Reagan's administration, she was released from the mental hospital and ended up homeless. One day – before Empire, when Lucious and Cookie were still struggling – Lucious came upon her on the street. She then put her in the home that Thirsty and Andre found her in.

Leah faced Lucious for the first time in years on Wednesday's episode. She questioned why he told his family "horrible" things about her; he said he was only telling the truth (considering he lied about her death, we know he was definitely not telling the whole truth, but whatever). Leah asserts that she's better now, and urged him to believe her.

Lucious was understandably shocked to see Leah. He then warmed up to her, and even seems concerned about her – but he might just be watching out for himself, as Lucious does. He wants to make sure she takes her medication, and is still a little hesitant. It's totally possible that Leah knows something about Lucious that he doesn't want to get out (besides his real name, "Dwight"). Leah being a part of the Lyon family will certainly be interesting to see.