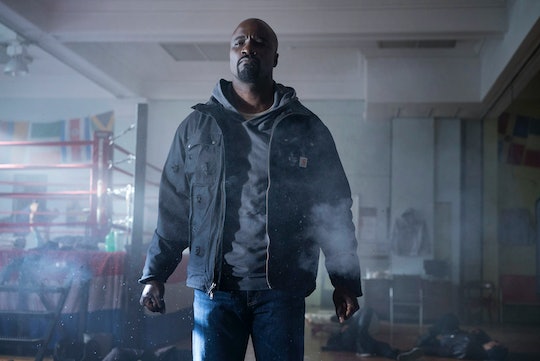 With the upcoming release of The Defenders, the different worlds of the Marvel Netflix universe are becoming ever more intertwined. This will be the first time they're all in the same place at the same time. But for Luke Cage, appearing in numerous Netflix shows is old news. After being introduced in Jessica Jones, Luke made his way to his own solo series before getting roped into The Defenders. In case you missed any of his many appearances, you may be wondering: what happened to Luke Cage before The Defenders?

Luke has been through a lot, to put it mildly. By the time he showed up on Jessica Jones, he'd suffered some of the biggest losses and most painful moments of his life, but his journey was far from over. Luke Cage delved more deeply into the life he led before viewers met him and how those events shaped the man he became. Luke's real name is Carl Lucas, and he was a cop until he was framed for a crime he didn't commit and sent to Seagate Prison. That was where he was subjected to the experiment that gave him his powers: his super strength and impenetrable skin, which can withstand anything from a syringe to a bullet. Seagate was also where he met his wife, Reva Connors.

After escaping prison and taking on the alias Luke Cage, Luke and Reva lived together happily for a time and opened a bar in Hell's Kitchen. However, Reva somehow gained information that made her a target of the villain Kilgrave, who used his mind control powers to make Jessica Jones kill Reva. Luke desperately sought justice for her death and became romantically involved with Jessica while looking for answers, unaware that she was Reva's murderer. Their relationship didn't withstand the revelation, though things got even worse from there.

Kilgrave's mind control struck again. He forced Luke to attack Jessica, which led to her shooting him in the head. It didn't end his life thanks to his unbreakable skin, but it did injure him and knock him unconscious; he was only saved thanks to the efforts of nurse Claire Temple. Once he woke up from his coma, Luke understandably wanted to get the hell out of Dodge, so he relocated to Harlem. Though he tried to stay out of trouble, trouble always seemed to find him.

Luke became embroiled in efforts to stop local criminal cousins who had a lot of power and influence in the neighborhood: drug and arms dealer Cornell "Cottonmouth" Stokes and prominent politician Mariah Dillard. That put him on their radar in a bad way. This was compounded by the arrival of Luke's half-brother Willis "Diamondback" Stryker, who had had a vendetta against Luke for years. He was the reason Luke was sent to Seagate in the first place, and he also wanted to kill Luke. In the middle of it all, Luke started a new romance with Claire.

Basically: Luke's been really busy. At the end of Luke Cage Season 1, he was sent back to prison for escaping in the first place, even though he had been innocent the entire time. Claire promised to get him in touch with a good lawyer she knew, allowing Matt Murdock to pave the way for Luke joining The Defenders. His business in Harlem remains unfinished in many ways, but it will have to wait until this newest threat is neutralized.