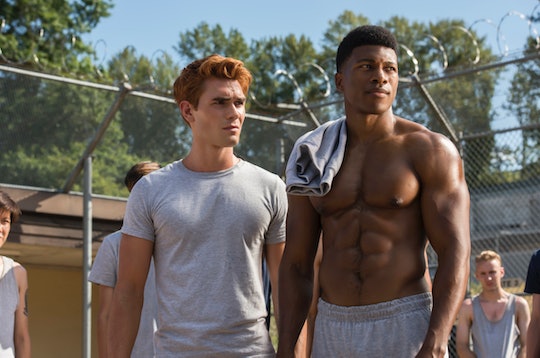 Fans Are Worried About Mad Dog On 'Riverdale'

It was disheartening to see Archie leave his life in Riverdale to spend a two year sentence at the Leopold and Loeb Detention Center, but once he got to juvie, his new roommate Mad Dog seemed like the friend that could help him get through this rough time. But after an orchestrated prison riot, Mad Dog goes missing, and Archie is told that he died. But exactly what happened to Mad Dog on Riverdale?

Warning: Spoilers for the first three episodes of Riverdale Season 3 ahead.

Mad Dog disappeared under pretty suspicious circumstances, so it’s not clear whether or not he is really dead. When Archie first met him, Mad Dog told him that he would soon be transferred to a real prison and that he had a family he wasn’t allowed to see. "Before this place, I had a mom, a little brother, girl too, Liz. They used to come visit me every Saturday," he tells Archie. "One day the warden tells me I can't see them anymore. They've been banned. 'It's for my own good,' he said. That was two years ago." While he doesn't go into detail about his past, I'm betting that the Warden has something to do with Mad Dog's current predicament.

For one, Mad Dog has a lot of things inmates normally wouldn’t have in juvie. When Archie first enters his cell, he sees that Mad Dog has a desk, numerous books, wall posters, an exercise bar, and a record player in the cell. Archie asks him how he got the stuff and how he managed to get through his time without joining the Serpents or the Ghoulies, and all Mad Dog says is that Archie should avoid being “tapped” at all costs.

When Archie asks Mad Dog to join him for a football game, he tells him that he has “other business,” but never explains what it is. The football game at the detention center turns into a riot, and Archie returns to his cell to find it completely cleared of Mad Dog and his belongings. When Archie asks prison guard Captain Golightly what happened to his cellmate, he is told that Mad Dog died because he was beaten during the riot. However, Archie knows that Mad Dog wasn’t there, and when he presses the guard for the truth, he is completely shut down.

It turns out that the riot was orchestrated by Warden Norton — who’s working with Hiram Lodge — and after seeing Archie beat three guards to a pulp during the riot, he comes to him with a proposition. "You impressed me today, proved you've got what it takes,” Warden Norton tells Archie. “You've been tapped. You're going to be my new Mad Dog." He forces Archie to fight in the detention center’s underground fight club, and after a successful fight, the Warden gives Archie “Mad Dog’s hand-me-downs,” including a book in which Mad Dog was hiding a rock hammer. The hammer gives Archie the inspiration to escape, so he tells the other inmates that he’s going to help them all get out.

In the trailer of Episode 5, during the next underground fight, there is a mysterious hooded fighter waiting for Archie in the ring. Some fans think that this might be Mad Dog, who will be forced to fight Archie to the death in the ring. “I think Mad Dog is going to be Archie's final opponent in a death match that the prison fight-club plot has been leading to,” wrote Redditor Succubint. “That's why the Warden is giving him the equivalent of his 'last supper'.”

Other fans think that Mad Dog is really dead, and that with Archie’s own death looming over his head, he will continue his attempts to escape. “I think that when someone (in this case, Archie) one ups the current Mad Dog, the current Mad Dog is killed,” wrote Reddit User LthePerry2. “We know based off the episode titles that episodes 5 to 8 will revolve around Archie’s escape from juvy, so I believe that his reason for escaping is that he will be the next one killed.” Whether or not Mad Dog is dead is yet to be seen, but with the introduction of his backstory and the depth of his character development, I think there’s a good chance fans will see him again.