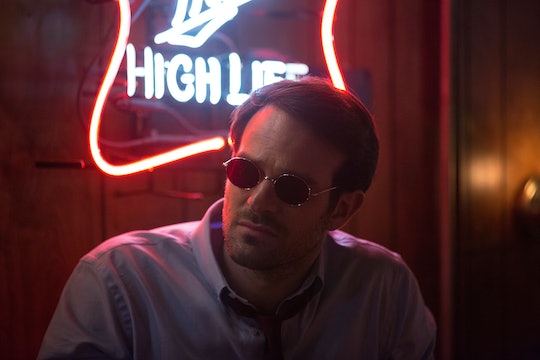 'Daredevil's Life Before 'The Defenders' Was Full Of Heartache

Daredevil was the first of Marvel's superheroes to make his debut on Netflix, and he's had two seasons so far to make his mark. Charlie Cox stars as blind lawyer Matt Murdock, whose secret life as a costumed vigilante is full of violence and Catholic guilt. Though Daredevil usually works alone, he'll be joining up with Netflix's other superheroes in The Defenders. But it looks like Matt's solo adventures will have a lot of impact on what's to come, so it's good to get a reminder: what happened to Matt Murdock before The Defenders?

When Daredevil first began, Matt was still finding his footing as a hero. Suiting up in a makeshift all black ensemble (R.I.P. his tight black shirt), he was taking on the criminal underworld in Hell's Kitchen with little more than a wing and a prayer. But Matt had developed heightened senses after being blinded in an accident as a child and that gave him an edge over his opponents. He spent most of the first season coming up against the villain Wilson Fisk, also known as Kingpin, as they both had very different ideas about how to save Hell's Kitchen.

But perhaps most relevant to The Defenders is Matt's romantic relationship with Elektra Natchios, which soon took a turn for the worst, unfortunately.

Elektra first showed up in Daredevil Season 2, but she was a part of Matt's life long before he took up fighting crime. As kids, they had both been trained by a man named Stick who belonged to a mystical group called the Chaste that seemed to exist to fight nefarious rival group The Hand like a less fun West Side Story. But Matt was unaware of this when he met Elektra in college and fell in love with her. She was there on a mission from Stick, but their relationship nevertheless became genuine.

Despite that, Elektra wasn't exactly good for Matt. She fed into his more dangerous impulses and ended up pushing him too far by diving into his painful past. Not long after Matt's accident, his father had been killed by the mob for winning a boxing match he was supposed to throw; this was one of the more traumatic incidents of Matt's young life, and understandably so. Elektra found the man who murdered Matt's father and brought Matt to his home to try and goad Matt into killing him. He couldn't do it, so they broke up.

When Elektra returned in Season 2, she seemed to be up to old tricks. However, she began to struggle with the violence that she felt was intrinsic to her nature, as well as the ease she had with killing. When she discovered that she was destined to become the Black Sky, a weapon for the Hand, it all seemed to make sense. She ultimately refused to join them in favor of fighting at Matt's side. At the end of the season, she sacrificed herself to save Matt in the final fight.

Her death, as well as the mess Matt had otherwise made of his life in the second season, led to him giving up his moonlighting gig as Daredevil. That's where The Defenders will find him: working as a pro bono lawyer with no devil horns in sight. That can't last for long, obviously; Matt will be pulled back into the world of fighting crime, especially when he discovers that Elektra has been resurrected by The Hand.

It looks like Matt will once again be dealing with the conflict of his double life in The Defenders, as well as his relationship with Elektra. With everything Matt's been through — and everything he's about to undergo — it looks like he could really use another visit to the confessional to vent about it. It's going to be a tough couple of months for Daredevil.