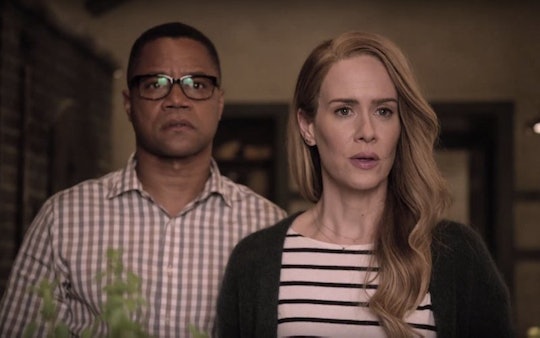 What Happened To Matt On 'AHS: Roanoke'? He Had A Disturbing Encounter In The Woods

The sixth season of American Horror Story is already kicking into high gear. We're only three episodes into the season, and we've already seen some absolutely horrifying things and met some legitimately terrifying characters. Matt Miller, the main male character of the show and one-half of the married couple at the nexus of all manner of supernatural spooks in his brand-new North Carolina house, had a particularly creepy encounter with one mysterious new character. But exactly what happened to Matt on American Horror Story: Roanoke?

The solidity of Shelby and Matt's marriage was one of the very first things that we learned about the two – it was literally the first thing that Shelby announced to the "audience" during the premiere's first "IRL" interview segment. Slowly, over the course of the first few episodes of the season, we've watched the relationship deteriorate, as all manner of hellish encounters (and the resulting disbelief and paranoia) came between the formerly happy pair.

But while Matt had been a little bit shaky on whether he believed Shelby's stories about her possibly-supernatural encounters, he had never overtly betrayed his wife. Until tonight's episode, anyway.

In one fell swoop, we saw the Millers' marriage possibly ruined forever, when Shelby stumbled upon Matt having very (*ahem*) vigorous sex with Lady Gaga's mysterious wood nymph ghost demon witch character in the middle of the woods.

I know what you're thinking – "?!?!?" But the circumstances of Matt's apparent cheating were not all that straightforward.

Matt and Shelby were in the woods to begin with because they, along with psychic Cricket and a desperate Lee, were attempting to bargain with a gaggle of ghost-demons in order to retrieve Lee's missing, ghost-demon-napped daughter Flora. (Ghost-demons are like geese, right? It's totally a gaggle.) Spearheaded by Cricket the medium, the group made an effort to bargain with Kathy Bates' terrifying, murderous character, The Butcher, begging her to contact Flora's not-so-imaginary friend Priscilla and ask her to return Flora to her family.

In the midst of the negotiating, no one realized that Matt had wandered off. When Shelby left to frantically search for her missing husband, she got a real shock – she saw him smack dab in the middle of a sexual encounter with the disheveled, devilish, demon/witch character played by Lady Gaga.

We know basically nothing about the nature of Gaga's character, or even the creature's name. All we know so far is that she's in cahoots with The Butcher and The Butcher's maybe-ghostly cohort of Roanoke colonists, having convinced The Butcher – then known as Thomasin – to pledge an oath of allegiance to her (via eating a heart) when Thomasin was still alive in the colonial era.

Now, the obvious theory here is that Matt was possessed and not in control of his actions when he had sex with the creature. That would explain why he had absolutely no reaction to Shelby stumbling upon the sight of the two copulating. Backing up that theory, when Shelby fled back to the house and confronted Matt for his apparent cheating, he was utterly, legitimately blank-faced. He claimed to have no memory of wandering away or of his illicit sexual encounter in the woods, something that Twitter grabbed ahold of and hilariously ran with.

Shelby didn't seem to be buying that excuse. In her anger, she stood idly by while the police arrested Lee. That would seem to indicate that Shelby is 100% done with both Matt and his sister, but we'll just have to tune into next week's episode of American Horror Story: Roanoke to see if that's really the case.