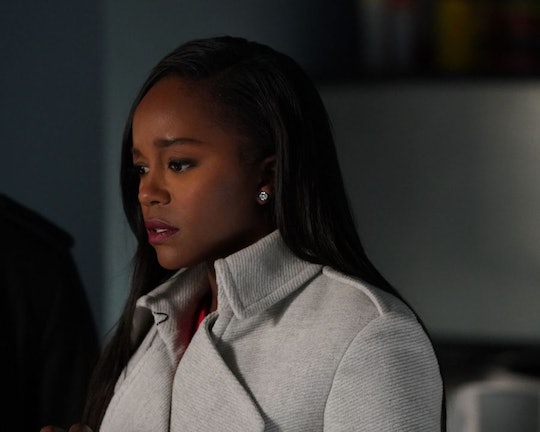 In the flash forward, Michaela is also at the hospital where Laurel is understandably hysterical and asking, "Where's my baby?" Annalise's therapist, Isaac, spots her in the hall and mistakes her for Annalise (seriously dude, they look nothing alike). Michaela's clearly been crying and there are blood stains on her dress. Isaac pulls her in for a comforting hug and she says, "He's dead isn't he? Everyone around us dies." Then when the camera pulls away it's revealed she's standing in front of the hospital nursery, and there are rows of babies, none of which appear to be Laurel's.

So was Michaela referring to Laurel's baby when she said "he"? It definitely seems that way, especially since, earlier in the episode, Laurel told Annalise it was a boy. Why drop that truth bomb early in the episode if it wasn't going to come back into play later? Also, she was standing in front of the nursery, because she was probably looking for the baby.

However, many people think that idea is much too easy for HTGAWM, which loves to hit fans with a good twist. So who else could Michaela be talking about? One of the Keating 4? This seems the most unlikely. Wes just died last season; it'd be a stranger decision to kill another main character so soon. Plus, I'm assuming when Michaela said everyone around "us" dies, she meant the Keating 4, which would mean she's referring to someone else besides themselves.

She's obviously not talking about Frank because he's at the hospital with Laurel. So that really only leaves Nate or Simon, but honestly would Michaela be that distraught if Simon died? She's threatened him on the show twice now, and he's just downright irritating. It seems the most obvious answer might be right this time, and Michaela really is talking about Laurel's baby.

But then there's the question of the blood on her dress. It doesn't appear to be her own and it seems like it could be related to the blood seen at Annalise's hotel room and in the elevator. But, whose blood is it? It'd be easy to assume it's Laurel's, but why was she with Annalise in the first place? Excuse the pun, but it's clear there's plenty of bad blood between them. What could've brought Laurel, and presumably Michaela, to Annalise's apartment? Perhaps it was Isaac, whose role in all of this is still very unclear.

Whatever the situation is, Michaela definitely seems to be a part of it in some way, which makes sense considering that, in the last episode, Laurel pretty much convinced her to use her internship to dig up dirt on Laurel's father. Michaela purposefully chose to work with Teagan at the firm, because she covers the Antares account, which is Laurel's dad's business. Perhaps Michaela gets in over her head, and Laurel's father does something to her like what he did to Wes. Except, somehow, Michaela survives it. Who knows?

There are so many possibilities right now, and the truth is fans will probably just have to wait and see what really happens. For now, let's just hope that Michaela is wrong and whoever "he" is, isn't actually dead. But with a show called How to Get Away With Murder, my hopes aren't all that high.