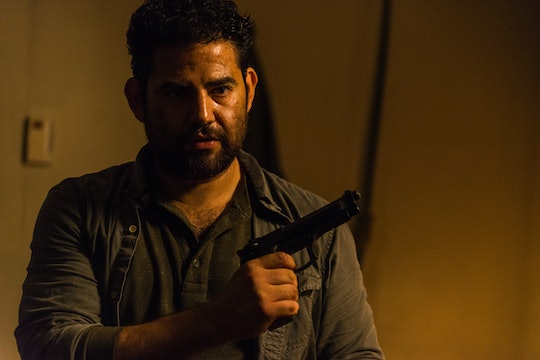 Morales' Backstory Needs To Be Revealed On 'The Walking Dead'

In "The Damned," fans of The Walking Dead were reintroduced to a character they hadn't seen since Season 1. The last time Morales had graced the small screen, he was a friend to Rick, Andrea, and Glenn; these days, he's running errands for Negan. So what happened to Morales on The Walking Dead? In the years since Rick last saw him, it's like he became a totally different person.

Morales was among the group who first found Rick when they were in Atlanta on a supply run. They brought him back with them to the camp where Rick was reunited with Lori, Carl, and Shane. However, when the group decided to travel to the CDC to get some answers about the zombie epidemic, Morales chose a different path. He decided to take his wife and two kids to Birmingham, Alabama to search for their other family members. Somewhere between departing to look for family and finding Rick again in the Saviors' armory, Morales joined up with the bad guys.

And viewers are sure to have nothing but questions about how that came to pass. Is Morales' family still with him? Did he ever find the people he was looking for? What could have possibly made him choose to join the Saviors as a hired gun for Negan?

Juan Gabriel Pareja, who plays Morales, spoke to Entertainment Weekly about his character's sudden return. According to him, with all the time that has passed and all the changes in Morales' life, it's almost like playing a brand new character instead of reprising a familiar role. It was also difficult to figure out Morales' character-altering journey because Pareja was kept in the dark about the details as much as the audience was. It made it difficult to prepare as an actor, but he did try to fill in the blanks for himself a little bit.

"I had always assumed that Morales was surviving out there and making it work, always hoping for the best, definitely being a survivor," Pareja told EW, adding:

I think we saw that streak in him in the first season. Other than that, man, I just figured he was out there surviving and doing probably some really nasty things in order to survive. I'm kind of naive and optimistic that he was still being a family man, and taking care of his family, and surviving out there in the awful world of The Walking Dead.

Though Pareja's words are the vaguest of vague, they do provide some hints about what happened to Morales. The journey hasn't been easy for any of the characters on The Walking Dead and many of them have come close to forgetting who they are because of what they've had to do to stay alive. The apocalypse has been hard for everyone: Shane, Rick, and Carol were all major characters who found themselves taking violent paths just to ensure their survival. Some, like Shane, ended up destroyed by it. Rick and Carol came back from the edge. Morales could still be in that muddy middle ground.

If Morales found himself in a desperate position and was looking to protect his family, then it wouldn't be too difficult to understand how he could get roped into the ranks of the Saviors. Like Dwight, he could have been working to keep them safe when he ended up getting in too deep. But there is also a chance that Morales is the only survivor from his family. If he'd had to watch his wife and children die, then perhaps he simply no longer cares about anything, especially issues of right and wrong. Trauma can cause people to act in ways they usually would not.

In his interview with EW, Pareja did say that some of Morales' backstory would come out in Season 8. Though viewers might not get all the answers about what happened to Morales and what turned him from ally to Savior, they can rest assured that they will get some of them eventually.