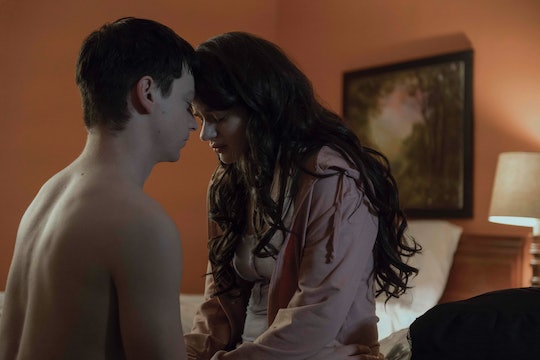 Hulu’s new series, The Act, is based on the true story of Gypsy Rose Blanchard and her boyfriend, Nick Godejohn. Both were charged in connection to the murder of Gypsy’s mother, Dee Dee Blanchard, who purportedly suffered from munchausen syndrome by proxy and kept her daughter sick. Gypsy is currently serving time in prison for her part in Dee Dee’s murder, but what happened to Nick Godejohn?

As reported in Springfield News-Leader, in February of 2019, Nick Godejohn was sentenced to life in prison after being convicted of first-degree murder by a Greene County jury. The conviction concluded that Godejohn stabbed Dee Dee in June 2015, three years after meeting Gypsy on a Christian dating website. According to the report, Gypsy testified in court that she and Godejohn planned to kill Dee Dee because it was the only way she believed she could escape her mother’s forced medical procedures and unnecessary rules. Gypsy told the court that she stole money from her mom so that Godejohn could take a Greyhound bus from Wisconsin to Missouri and stab Dee Dee to death.

According to MSN, after leaving a trail of evidence of the crime, both Gypsy and Godejohn were arrested, and subsequently confessed to the murder. However, Godejohn’s attorney, Dewayne Perry, argued that his client was autistic and was manipulated into committing the murder. In an interview with Dr. Phil in 2017, Gypsy claimed that Godejohn had multiple personalities, and that he killed her mother under a personality named Victor — a violent, 500-year old vampire.

But Godejohn maintains that he was merely a pawn in Gypsy’s plan to kill her mother, and when talking to ABC News in 2018, he implied she used him to get her way. "She was basically the mastermind behind it all [and] I was basically a hired hit man in its own weird sense," he told the outlet. “I loved Gypsy to the point where I would ... do anything for her. I've proven that with what I did. Unfortunately, because of how far I went, I feel as if she's betrayed me. I feel that she's abandoned me.”

During his sentencing, Godejohn asked the court for mercy and explained why he thinks he was so easily manipulated. “When this whole thing happened, all I ever wanted was to be with Ms. Blanchard, that’s all I ever wanted to be,” said Godejohn. “I’ve never known what it was like to have motherly love, I’ve never knows what it’s like to have a female connection — Because I’ve never known it, is part of the reason why I strived so hard to get it. It’s always been a missing link — and that’s the reason why, I guess when I got so deep into this situation, where I fell in love so deeply.”

Currently, according to the Missouri Department of Corrections, Godejohn is serving time at Fulton Reception & Diagnostic Center in Fulton, Missouri. On its website, the facility describes itself as a place that provides each inmate with a “diagnostic process which includes, a mental health screening, medical needs assessment, and educational evaluation from trained professionals.”

The Act currently streaming on Hulu.

More Like This
The Shocking True Story Behind Hulu’s New True Crime Series Candy
Did Michael Peterson Ever Remarry After Kathleen's Death?
14 More Amazing Shows Like Workin' Moms To Watch That Also Get Real About Motherhood
Yellowstone Season 5 Will Have More Episodes Than You Were Expecting