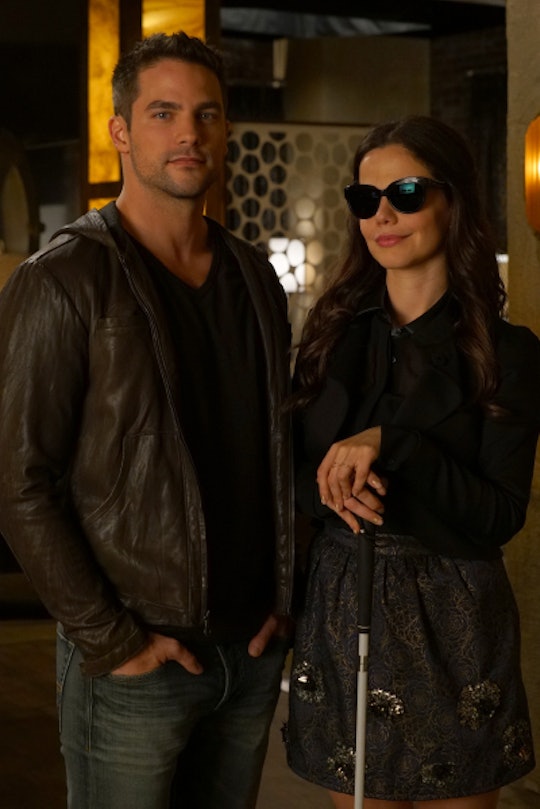 What Happened To Noel On ‘Pretty Little Liars’? It Had To Be Seen To Be Believed

Noel Kahn just bit the dust on Pretty Little Liars and it was perhaps one of the most spectacular TV deaths in this show's history – in many shows' histories, in fact. From the very beginning of tonight's episode, "The DArkest Knight," Noel was having a rough time. Hanna had him tied up in a tiny hotel room, barely conscious while she brandished a knife threateningly in his direction. Hanna was after two things: a confession that Noel was A.D. and DNA proving that he was Mary Drake's other child. Unfortunately she didn't get either and Noel got free just in time to do some last minute menacing before he crossed over to the other side. So what happened to Noel on Pretty Little Liars?

Please come on this journey with me step by step. The Liars (Spencer, Emily, Hanna, Alison, and Aria) were locked up in an old, closed school for the blind with Jenna and Noel. Jenna turned off the lights so that everyone would be on an even playing field with her while she waved a gun around willy-nilly. Meanwhile, Noel was going after Emily and Hanna with a literal battle-axe that he picked up from within the house of horrors. In the melee, the axe fell to the floor – blade side up. Obviously no good was going to come of such a setup. Well – no good for Noel.

In the pitch dark scramble, Emily punched Noel and he toppled over, but he didn't just fall on the axe blade like one would expect. No, he fell on it in such a way that he was decapitated, after which his head proceeded to roll down the stairs and land at the remaining girls' feet. It was amazing.

Noel's motives for joining up with Jenna are uncertain, outside of general one-note villainy. He did some pre-death rambling about how "b*tches" never "understood" him and he always gets what he wants, which proved to be untrue unless what he wanted was to be beheaded by accident in an abandoned schoolhouse. Noel probably would not have requested that as a way to go out.

This is the second accidental death on Emily's track record – third if we're counting being in the car when Archer Dunhill was run over – so by now it's probably old hat for her. It probably won't look good when she's filling out that swim coach application, though.

Now that Noel is gone, it's even harder to understand what reasons he had for joining Jenna's team. Was it really revenge for the blackmail material Alison had on him from all those years ago? Whatever his reasons were, he definitely picked the wrong side. So far everyone on Team Jenna have ended up dead except Jenna herself.