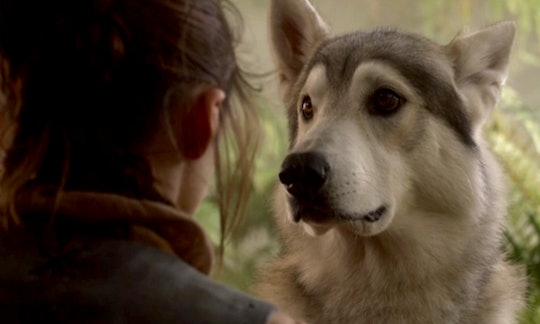 Because Game of Thrones is an incredibly depressing show, the Stark direwolves seem to have an even shorter lifespan than the Starks themselves, which is saying something. Jon Snow's wolf, Ghost, is still around, but what happened to Nymeria on Game of Thrones? Arya's beloved wolf hasn't been seen in a very long time, but previews suggest she could be making her triumphant return very soon.

If you can remember way back to Season 1, Joffrey, also known as The Worst, tried to attack Arya. Because dogs — and wolves I suppose — are protective of their masters, Arya's wolf Nymeria lunged at Joffrey and bit his arm. Because Arya knew that Joffrey and Queen Cersei would never let Nymeria live after that, Arya forced Nymeria to run away for her own protection. She even resorted to throwing rocks at Nymeria until she left. Heartbreakingly, Cersei ordered Sansa's direwolf Lady to be killed instead. (I'm still angry about this, to be honest.) Since then, fans have had to witness the demise of Shaggydog, Rickon's direwolf (remember Rickon?) and Bran's direwolf Summer, who gave her life protecting Bran from the White Walkers. This leaves just Ghost still around to protect Jon, while Nymeria could be anywhere.

In the books, Nymeria's location is alluded to, but never outright confirmed. Arya hears word of a giant wolf pack led by a ferocious female wolf with no fear of men. A little later on, Arya begins to have wolf dreams, in which she is the ferocious leader of this deadly wolf pack, and at one point drags Catelyn Stark's dead body out of the river. In the show, it's becoming clear that there will be no Lady Stoneheart, who in the books is Catelyn come back to life with the sole purpose of avenging her family. There has also been no mention of Arya "warging," which is the term for when someone inhabits the body of an animal. In the books it is fairly clear that Arya is warging into Nymeria in her dreams, even if she herself is not certain of what happened.

The show has, by now, outpaced the source material, and has been taking greater liberties in the later seasons. Possibly Nymeria has been leading the world's most terrifying wolf pack in the years since we've last seen her in the show, as well as the books. But what I really want to know is how she's going to react to Arya now. Will their bond be as strong as ever? I really hope so, because I can only take so much more heartbreak from this show.