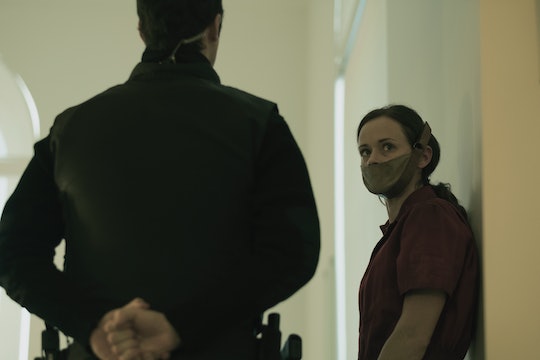 Ofglen Deals With A Harrowing Event On 'The Handmaid's Tale'

Warning: Episode 3 spoilers ahead. Early on in the first episode of The Handmaid's Tale, Offred dismissed her shopping partner Ofglen as pious and a true believer in the Republic of Gilead. She quickly learned that was not the case; not only was Ofglen not a believer, she was also actively trying to undermine the new government. She was part of a secret resistance that gave her access to information no handmaid was supposed to have. That put her in a dangerous position, because she was refusing to give in to the new life that had been forced upon her. In whatever way she could, Ofglen was fighting. But it had grave consequences. At the end of Episode 2, Offred arrived at her gate to find Ofglen had been replaced by a stranger. So what happened to Ofglen on The Handmaid's Tale?

Ofglen was taken into custody by the government, though it turned out it wasn't because of her connections with the resistance. It was because she was what the leaders called a "gender traitor," their term for LBGT+ people. Before Gilead was formed, Ofglen had been a college professor named Emily with a wife and a son. With the intense focus on "traditional" family values and rigid gender roles, anyone who was gay in Gilead was immediately violating the law. Ofglen was discovered having a relationship with another woman (a Martha, the term for servants and housekeepers) and that was what got her in trouble.

Episode 3 was a harrowing journey through the legal system of Gilead as Ofglen was put on trial, convicted, and punished for her relationship. She was robbed of a voice in the most literal way: a mask put over her face to prevent her from speaking. No one spoke at her trial except the representative of the state, and both she and her partner were sentenced with no attempt at defense. Their word was meaningless in Gilead. They were already guilty.

Ofglen's partner was immediately executed, but Ofglen was still considered useful because of her fertility. She was sentenced to "redemption," though it wasn't clear what that meant until the end of the episode, when Ofglen woke up in a sterile hospital setting and saw that her vagina was bandaged. Aunt Lydia, one of the women tasked with training and controlling the handmaids, arrived to explain in veiled terms what had happened to Ofglen. She would still be able to have children, but she would no longer be able to "want" what she couldn't have. Though not explicitly stated, it seemed clear that Ofglen had been subjected to genital mutilation of some kind, and her clitoris had likely been removed.

The immense, crushing horror of that moment played out on Ofglen's face as the episode concluded. What happened to Ofglen was an addition of the show (it wasn't present in the novel) that drove home the inhumane brutality of Gilead, where women were only worth what their bodies could do. Not only were their personal feelings and desires irrelevant, their feelings needed to be eradicated. Ofglen's individuality, autonomy, and agency were all taken from her. They wanted to deprive her of any sense of hope or escape, but only time will tell if they succeeded.

In a show filled with incredibly difficult moments, Ofglen's fate was one of the toughest to take in.