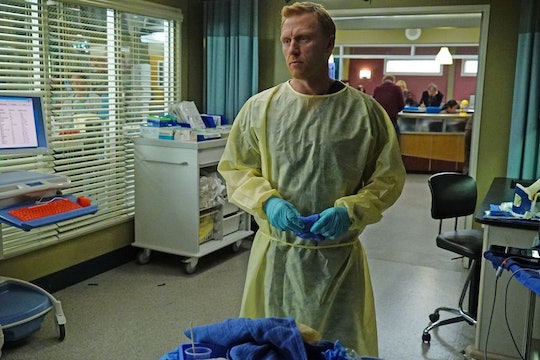 Owen's Sister Has Been Through A Lot On 'Grey's

The Grey's Anatomy season finale kept fans hooked until the very end, but thankfully, unlike finales in the past, this one didn't have a cliffhanger that will leave us stressed for the next few months. Instead, it presented the exit of one character and the introduction of another. Owen's long lost sister, Megan Hunt, has finally been found, raising the question what happened to Owen's sister on Grey's Anatomy? Well, it depends on who you ask.

During that period where Owen and Nathan still hated each other, they each gave different versions of the story. According to Nathan, he had been working in the field with Megan (they were in the army) and they needed to transport a patient, but only one other person could fit in the chopper. Since it was Megan's patient she wanted to go and eventually Nathan agreed. However, the chopper unfortunately never arrived.

Owen then told a different story. According to him, Nathan wasn't even around that day. Instead, he was actually with another woman and Owen knew this because Megan had called him earlier that day and told him Nathan had repeatedly cheated on her. So what is the truth?

Well, both Nathan and Owen eventually added to their stories. Nathan did later admit that he had cheated on Megan, however he never confirmed if he was really there that day she got into the helicopter or not. Owen also later added that he told Megan to get into that helicopter after she told him Nathan had cheated her. He also added how that was the last thing he ever told her.

However, now both Owen and Nathan are getting a second chance. After getting an unbelievable phone call from the military, it turns out Megan was actually alive this whole time. Nathan, who previously reminded Owen that he was the one who gave up looking for her, will surely remember that conversation when he gets to the hospital and sees Megan again, possibly causing another rift between the two. Actually, while I'm happy Megan's alive, her reappearance will surely cause problems for a few people.

Most fans are already upset about the fact that Meredith was finally moving on and found someone she could really love only for his ex-fiancée to come back. Again, totally happy she's alive, but couldn't she wait until Meredith and Riggs were already married to be found? Of course not; this is Grey's Anatomy after all.

So what will Megan's return to her family and fiancé mean? Unfortunately, fans will have to wait until next season to find out.