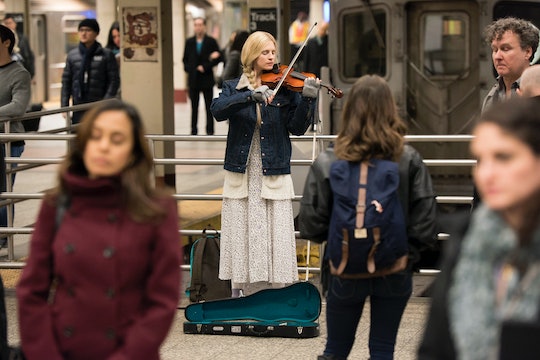 What Happened To Prairie On 'The OA'? She May Have Found The Other Dimension

(Warning: this post contains spoilers from The OA Episode 8.) The first season of Netflix's newest drama, The OA, left many fans with a lot of questions and wondering what could possible happen next. Throughout the eight episodes of the season, fans watched as Prairie — who was once blind but after missing for seven years returned with her sight — tried to find her way back to her fellow hostages. In the final moments of the episode, Prairie was shown waking up in a white space after being shot and saying, "Homer," the name of her fellow captive and the man she fell in love with. But what exactly happened to Prairie on The OA and where is she now?

In the season finale, Prairie was shot in the chest after the five friends she'd made when she returned used the five movements to distract the shooter long enough for him to be tackled. Prairie was taken away in an ambulance, so it seems when she wakes up and everything is white that she's awakening in the afterlife and that she died... again. However, this doesn't seem right.

Prairie has died at least twice and ended up in a place that didn't look anything like where she ended up in the final moments of Episode 8. Although it was implied that Prairie actually made up her story about everything that happened when she was trapped with Homer and the others, the fact that the movements essentially worked seemed to indicate she didn't make it up after all. So if Prairie really did die those times before, shouldn't she end up in the same place when she died again?

An alternative theory is that the five movements did what they were always supposed to do and created a tunnel for Prairie to go to another dimension where she believed Homer and the others were. That would explain why she presumably sees Homer when she wakes up. However, if Homer died then maybe Prairie really did die too, but now they're together in the afterlife? Still, this just doesn't seem likely. For one thing, if Prairie and Homer are truly dead then what could possibly happen next?

It seems unlikely that this first season would end with Prairie's death. It seems much more likely that she's found the other dimension and the next season (if there is one) will be all about what lies in wait there.