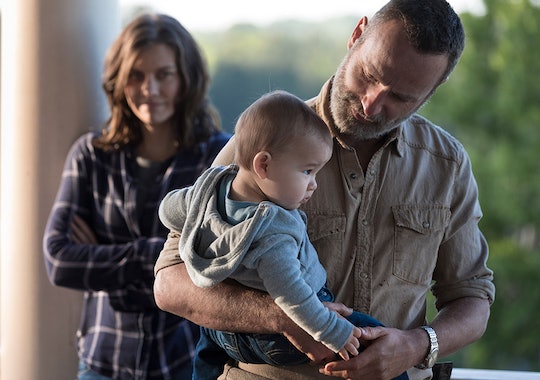 This Is How 'The Walking Dead' Bid Farewell To Rick Grimes

The era of Rick Grimes has come to an end. After just over eight seasons leading the charge on The Walking Dead, Rick Grimes, portrayed by Andrew Lincoln, has moved onto a better place. So, what happened to Rick Grimes on The Walking Dead? I'm happy to tell you everything, but first a warning — major, major spoilers from Rick's final episode of The Walking Dead are about to be shared. If you aren't caught up on Season 9 and have no interest in being spoiled, I highly suggest you stop reading this right now. But, if you're game for some spoilers... well, carry on!

What happened to The Walking Dead's lead character can be summed up in four words: Rick Grimes is gone. When the episode begins on Sunday, Nov. 4, we are transported back in time to when we first met Rick in the very first episode of Season 1. It's like deja vu when we see Rick back in a coma in his hospital bed. But something is different about this scene, and we quickly learn that it's because present day Rick, as in the Rick who is currently bleeding from his abdomen, is standing at the foot of come Rick's bed. Trippy.

From there, the episode is a wild roller coaster of emotions. As Rick fights to survive from his injury and falls in and out of consciousness, we're taken to different planes where Rick encounters some familiar faces. First he finds himself with Shane, his pre-apocalyptic partner and the best friend he was forced to kill in Season 2. Later he finds himself in the presence of Maggie's dad, Hershel, who died at the hand of The Governor in Season 4. Last but certainly not least, Rick comes face-to-face with Sasha, who took her own life while she was being held captive by Negan in Season 7. All three "Ghosts of the Apocalyptic Past" help guide Rick, who continues to claim he's looking for his family.

When it comes down to Rick's final moments, it's a face-off between the sheriff and a herd of relentless walkers. He somehow finds himself at the bridge that he's been so focused on finishing no matter what it takes out of everyone else. It's around this time that everyone else — Daryl, Michonne, Maggie, etc. — finally find him, but they can't get to him because of the herd. They immediately start trying to distract the herd, but Rick knows it's not worth it. Before anyone else he loves can get hurt, Rick uses his gun to shoot a pile of dynamite that a walker conveniently knocked over on the bridge. The bridge explodes, taking Rick with it — all while his friends and family are forced to watch. It's not just heart breaking, it's heart shattering.

But, believe it or not, that's not the last time we see Rick. Moments later when we catch up with Jadis, who is desperately trying to connect with her mysterious helicopter friends, she's watching all of the burnt walker bodies float down the river — and that's when she spots Rick, badly injured but somehow still alive on the river bank. The last time we see Rick he's on a helicopter, with Jadis, flying off to who knows where.

So, no The Walking Dead fans, Rick isn't dead. At least not that we know of. But will he ever return to to his friends and family? Well, we're just going to have to keep watching to find out, won't we?