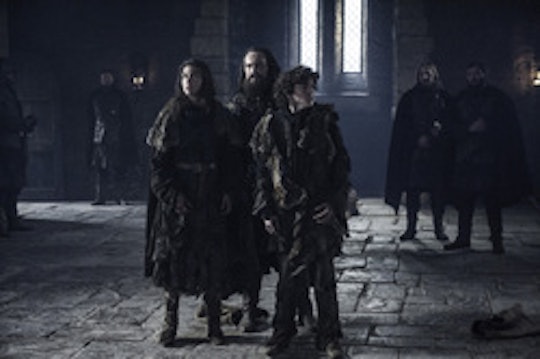 What Happened To Rickon Stark In The 'Game Of Thrones' Books? It Involves Unicorns

On Sunday's episode of Game of Thrones, we saw the return of a character we haven't seen since Season 3, the long lost Rickon Stark. He was a very small child when the series began, and now he has grown into a full-fledged pre-teen, one in the direst of circumstances. Smalljon Umber, supposedly loyal to the Starks, delivered him as a "gift" to Ramsay Bolton, a psychopath of the absolute highest order. Theories abound as to what's going to happen next. Are the Umbers planning an elaborate con on Ramsay? Will Rickon be saved by his brother Jon Snow? Is Rickon dead meat? Perhaps we can look for clues from the source material. What happens to Rickon in the Game of Thrones books?

When we last saw Rickon at the end of Season 3, Bran was sending him off under the care of Osha to go find the Last Hearth, the seat of the Umbers. The Umbers are supposedly Stark bannermen, and Bran was sure they would take good care of him. Not so much, it appears. In the books, Rickon does not go to the Umbers at all. Instead, he goes to the Island of Skagos, where the inhabitants reportedly have human flesh for breakfast and ride unicorns into battle. Fun! Rickon is supposedly the wildest of all the Stark children, and even Art Parkinson, the actor who plays him, has hinted that in the past couple of years Rickon has grown rather feral. Perhaps he was at this mysterious wild island after all.

In the books, rather than hang out with Jon Snow's corpse for days, Ser Davos is sent by the Northern lord Wyman Manderly to fetch Rickon from Skagos, in order to challenge Roose Bolton's claim to be Warden of the North. This would be the Great Northern Conspiracy, basically where the Northern houses are not, in fact, super jazzed at being led by the creepy Boltons, and are actively trying to reinstate the Starks as Lords of Winterfell. This would dovetail nicely with the theory that Smalljon Umber in the show is actually just trying to pull a fast one on Ramsay, and has brought Rickon back to Winterfell to be its leader.

In fact, the more I think about it, the more likely it seems that Rickon is in less dire straits than I thought. I mean, if Rickon has actually been palling around with Unicorn-riding cannibals for all this time, maybe the time has finally come for Ramsay to get what's coming to him.