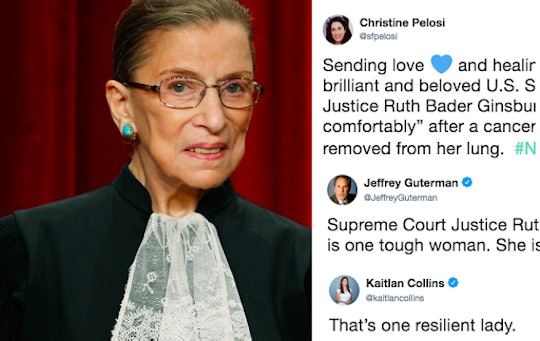 Anytime a long-time public figure is trending, it's only natural to hope that everything is OK. Today, many people are likely wondering: What happened to Ruth Bader Ginsburg? On Dec. 21, Supreme Court Justice Ginsburg underwent surgery to have two cancerous nodules removed from her lungs, as CNN reported. The Supreme Court confirmed that she was indeed in the hospital, news that comes just a month after she was hospitalized for falling and fracturing three ribs.

For now, people on social media are sending the 85-year-old SCOTUS Justice their best wishes as she recovers, even those who say they don't necessarily support her viewpoints or politics, which is pretty significant in today's political climate. "I am a conservative who supported the appointments of Gorsuch and Kavanaugh," one Twitter user wrote. "I also pray for a quick recovery for Ruth Bader Ginsburg and hope that she lives a long life and stays on the Supreme Court as long as she desires."

Another wrote, "Everytime [sic] Justice Ruth Bader Ginsburg trends I'm pretty sure I have a heart attack. She can have my lung, kidney, heart, liver, appendix, hips, knee-caps, ears, soul, whatever... whatever the hell she needs she can have it." (A sentiment likely shared by many.)

Though it is an undoubtedly scary time, CNN reported that it is not the first instance in which Ginsburg has dealt with cancer. In fact, she was reportedly treated for colorectal cancer in 1999, and then pancreatic cancer 10 years later.

The official notice from the Supreme Court that shared the update regarding Ginsburg's health stated that the cancerous lesions were discovered while she was undergoing tests for her fractured ribs a few weeks ago. Followers on Twitter have taken note of this fact, saying things like, "Sometimes bad things work out for the best."

But more significantly, people seem concerned that ongoing health issues could signal Ginsburg's retirement. However, earlier this year, Ginsburg made it known that she was planning to leave her job at the Supreme Court only on her own terms.

“I’m now 85,” CNN reported she said when asked about when she would consider stepping down. “My senior colleague Justice John Paul Stevens, he stepped down when he was 90. So think I have about at least five more years.”

Though it seems like there is still so much to know, the Supreme Court was reassuring that updates will be shared as they are available. Today's notice read as follows:

Justice Ruth Bader Ginsburg underwent a pulmonary lobectomy today at Memorial Sloan Kettering Cancer Center in New York City. Two nodules in the lower lobe of her left lung were discovered incidentally during tests performed at George Washington University Hospital to diagnose and treat rib fractures sustained in a fall on November 7. According to the thoracic surgeon, Valerie W. Rusch, MD, FACS, both nodules removed during surgery were found to be malignant on initial pathology evaluation. Post-surgery, there was no evidence of any remaining disease. Scans performed before surgery indicated no evidence of disease elsewhere in the body. Currently, no further treatment is planned. Justice Ginsburg is resting comfortably and is expected to remain in the hospital for a few days. Updates will be provided as they become available.

The nation will certainly be keeping a keen eye out this holiday season, and wishing Ginsburg a safe and healthy recovery in the meantime.