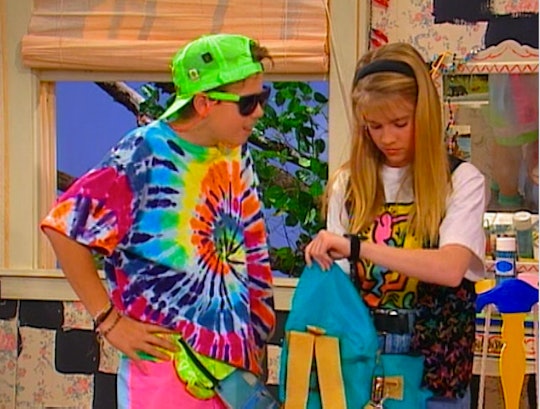 What Happened To Sam From 'Clarissa Explains It All'? Sean O'Neal Has Been Busy

Any '90s kid probably gained some significant life skills by watching Clarissa Explains It All. The show featured a young Melissa Joan Hart dispensing wisdom from her brightly decorated bedroom. In addition, the show featured many iconic characters, such as her pesky brother Ferguson and her formerly hippie parents. But of course everyone remembers her skateboarder friend Sam Anders, who entered her second-story bedroom from a ladder to the sound of a guitar chord. So what happened to Sam from Clarissa Explains It All? Because it's fun to imagine him running a skate shop of his own some place.

Unfortunately, it's difficult to find much information on what the actor Sean O'Neal is up to these days. He does appear to have an interesting background: as explained by his personal website, it looks like O'Neal got his start in a Florida singing group called The New Dimensions. It appears to have been a boy band sort of deal, although not much information is available. According to his IMDb page, after his three year run on Clarissa, O'Neal appeared in a short called The Cost (2009), a couple episodes of the show Development Hell (2013), and the indie drama Penumbra (2015). Beyond that, there does not seem to be a trace of the man on any form of social media or other avenues. (And fans of The A.V. Club, take note: their senior editor is not the same Sean O'Neal. In fact, he states this in his bio on the website.)

So how can you deal with your desire for all things Clarissa in the meantime? Fortunately, other aspects of the show live on in current media. Many episodes of the original show are streaming on Hulu or Amazon Video. Nickelodeon story editor Mitchell Kriegman even wrote Things I Can't Explain: A Clarissa Novel (2015), which re-imagines characters from the show in a more modern context. Do she and Sam stay friends, or does a romance happen?

Whatever he's up to these days, Sean O'Neal has made an indelible mark on the lives of millennials everywhere. After all, how many characters from '90s TV shows appear in recent novels? He's the reason young adults all over the world still daydream of a best friend who snubs front doors in favor of bedroom ladders.

More Like This
'Call The Midwife' Has A Fascinating True Story Behind It
Take An Exclusive Look At A Brand New, Four-Part Peppa Pig Special
'Top Gun: Maverick' Is More Tween-Friendly Than The Original
14 Preschool Graduation Songs You'll Love To Sing Along To