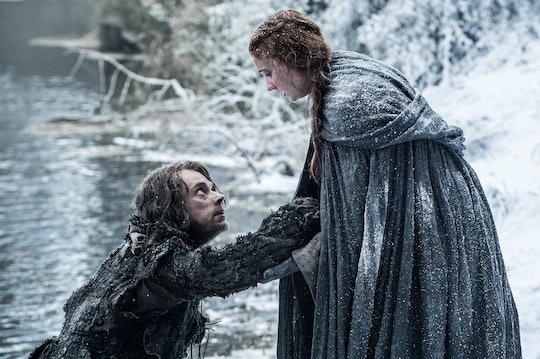 What Happened To Sansa & Theon On 'Game Of Thrones'? It Looks Like They Survived

Season 5 of Game of Thrones was not good to Sansa Stark. Then again, I'm not sure there ever was a good season for Sansa. Maybe Season 1? Either way, after being forced to marry Ramsey Bolton and then constantly raped by him, Sansa was ready to do anything to escape Winterfell. So, when Stannis Baratheon finally attacks Winterfell, Sansa decides it's time to make her exit, especially after she and Theon kill Ramsey's "girlfriend", Myranda. With not a lot of exits out of the palace and to freedom, Sansa and Theon decide to make a jump for it, in the hopes that all the snow on the ground would be enough of a cushion to protect their fall. And thus ended their storyline in Season 5. But what happens to Sansa and Theon on Game of Thrones next?

Well based on the trailer for Season 6, and the photos that have been released, it's obvious that both Sansa and Theon survive the jump. What really concerns me, though, is how they're going to actually escape Winterfell. Ramsey demolished Stannis' army and Brienne is currently dealing with Stannis, so she's not coming to aid Sansa right now. So how exactly will Sansa and Theon get out of Winterfell on foot?

Obviously Sansa and Theon are going to need a little help and who better to help them than the people of the North who are still loyal to the Starks. Sure, Ramsey killed that poor old lady who was just trying to help Sansa out, but she was just one person and as the saying goes, "The North remembers." As long as Sansa can find someone that she trust, at least long enough to get away from the mess that is Winterfell, she and Theon can make there way to...well, somewhere.

The truth is, Sansa kind of has nowhere else to go. She can't return to Kings Landing because the Lannisters would kill her with no hesitation and the Starks' don't really have any allies at the moment. As far as Sansa knows Arya is dead, and even though she now knows Theon didn't really kill Bran and Rickon, she still doesn't know where they are. And whether or not you believe Jon Snow is dead, the Wall isn't really the best place to be right now, regardless.

Her best bet would be to find Petyr Baelish, and let's face it, he's really just the lesser of all evils. Let's not forget he was the one that left her in Ramsey's care in the first place. But at the end of the day, Petyr would probably protect Sansa because of his love for her mother (and maybe his love for Sansa?) and his confusing sense of loyalty.

Game of Thrones has now surpassed the books so really anything could happen at this point. We'll just have to wait until April 24 to see what really happens to Sansa and Theon next.