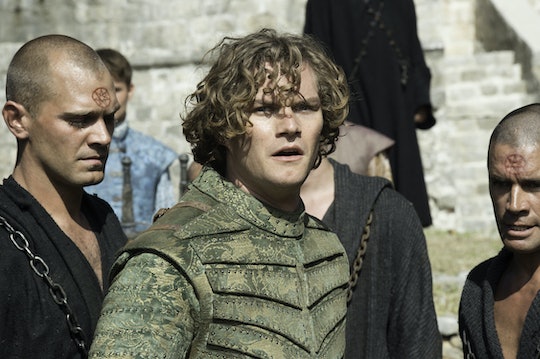 What Happened To Ser Loras Tyrell On 'Game Of Thrones? He Was MIA

Obviously he is probably still locked away in a dungeon somewhere below King's Landing, but since the season premiere touched on pretty much every important storyline that was left up in the air last season, fans understandably expected to see the fate of Queen Margaery's brother. Which brings up another excellent point. Of course Cersei is arguably one of the worst characters on Game of Thrones and her famed walk of shame was totally warranted, but her crimes and Margaery's are not the only ones committed. According to The Faith, Loras is just as eligible to be tried in court for his crimes, so where is he now?

Will Loras have a walk of shame too? Probably not. First, because it's been done, and it was hard enough to watch an evil woman like Cersei go through it, let alone a character like Loras who is pretty much harmless. But also because something tells me that there will be other punishments in store for the Tyrell siblings.

If I let my imagination run wild, I can totally see Loras being held in the offices of Qyburn, the doctor who brought The Mountain back to life, being experimented on and downright tortured. But it's more logical that he's just being held in a cell somewhere below the castle.

The good news is that we have nine more episode of this season of Game of Thrones to see Loras and follow his story and — hopefully — see the Tyrell's luck turn around in King's Landing. Or, if George R.R. Martin has his way, we'll just see Loras and all of the good guys die by the end.