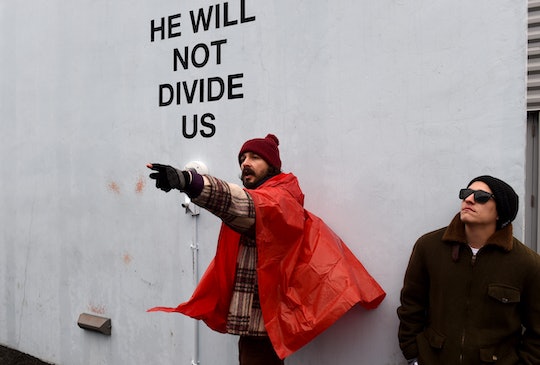 After the inauguration of President Donald Trump and the marches and protests that followed, many celebrities have spoken out against the new administration on social media and in real life. One actor had even gone so far as to stage a protest live stream that's been ongoing since the inauguration. What happened to Shia LaBeouf? The actor behind the live stream was arrested early Thursday morning after an altercation.

LaBeouf, best known for his roles in Transformers, Disturbia, Holes, Even Stevens and Sia's music video for "Elastic Heart," has been staging a live streamed, ongoing protest event called "He Will Not Divide Us" since the inauguration of President Trump last week. The performance project was further explained on the website as:

Open to all, 24 hours a day, seven days a week, the participatory performance will be live-streamed continuously for four years, or the duration of the presidency. In this way, the mantra "HE WILL NOT DIVIDE US" acts as a show of resistance or insistence, opposition or optimism, guided by the spirit of each individual participant and the community.

LaBeouf has been a central figure in the live stream, which is located in the Bronx where he lives. ABC News reported that just after midnight on Wednesday, the stream caught what appeared to be some kind of altercation between LaBeouf and another man. LaBeouf was subsequently arrested, charged with a misdemeanor, and released with a yet-to-be-determined court date. A request for comment to LaBeouf's representatives has not been returned.

The other man, who appeared on the live stream but has not been identified, was seen putting his arm around LaBeouf and saying "Hitler did nothing wrong" prior to the altercation, which allegedly involved LaBeouf yanking the man's scarf and scratching his face. New York City Police spokesman Sgt. Thomas Antonetti confirmed the arrest to CNN Thursday morning, and many of LaBeouf's fans says the arrest was caught on the live stream itself.

After his arrest, fans and supporters took to social media — particularly Twitter — with the hashtag #FreeShia. In recent years, LaBeouf has brought performance art into his more traditional film work, leaving behind the lucrative Transformers franchise for short films like HowardCantor.Com which he directed and starred in back in 2012.

This isn't LaBeouf's first high-profile run in with the law. He was charged with a misdemeanor after his 21st birthday in 2009, which he explained: "I got really wasted in Chicago and ended up celebrating in Walgreens." The store eventually dropped the charges, according to The Hollywood Reporter.