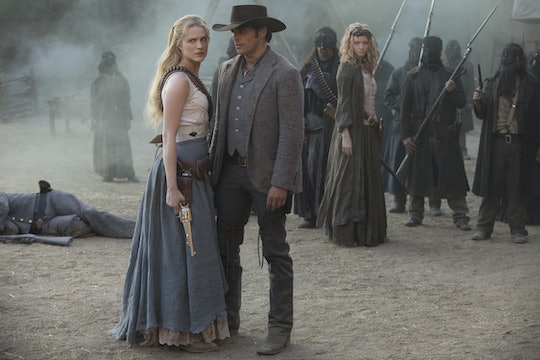 Teddy's Fate On 'Westworld' Just Got A Lot More Interesting

Oh Dolores, what have you done? A significant portion of Sunday night's Westworld episode "Akane no Mai" may have been dedicated to visiting Shogun World, but the end of the hour concluded with Teddy undergoing a massive change in his personality, and it's all thanks to the woman he loves. So what happened to Teddy on Westworld, exactly? His character may be forever changed from here on out.

In the past, viewers have seen Bernard or other members of Delos altering the personalities of hosts in order to fit their own objectives. If you want to make a host nicer, all one needs to do is change their code electronically — much like Maeve did when she became sentient. In fact, her alterations have made it possible for her to be able to control other hosts' actions. Teddy has now been given a similiar treatment, except he isn't being made nicer. He was arguably already the nicest host in the series. Instead, Dolores changed his code so that he will now be much more aggressive and violent, In other words, the exact opposite of everything Teddy has ever stood for on the show. So the Teddy as we've come to know him could be gone for good.

Granted, Dolores didn't seem to come to this decision lightly. Her feelings for Teddy throughout the episode seemed entirely genuine. They even slept together for what appeared to be the first time and for a moment it felt like Dolores was thinking about forgetting the host rebellion and running away with him. But alas, that wasn't the case after all. She may have considered the alluring prospect of living happily ever after for a moment, but deep down Dolores craves vengeance on the humans who have used and abused her for so many years. No one could change her mind about that — not even poor Teddy.

Dolores realized that as much as she loves Teddy for his kind and genuine nature, he's not the best person to go into battle with. He's not made for the world she's hoping to create and wouldn't condone the actions she'll have to take in order to reach her goal. He could end up being her undoing. So while she didn't want to pull the plug, so to speak, on him completely, she figured tweaking his personality traits was really her best option. As for what Teddy will be like now that he's been given this violence-prone upgrade is hard to say, at least for now. The episode came to a close before viewers could really access how truly different this lovable cowboy will be from here on out. But I'd say it's definitely going to give James Marsden, who plays Teddy, a chance to stretch his acting chops a bit.

Some may have found Teddy's story arc to be somewhat boring up to this point. (I mean, he's a good guy and everything, but he's nothing if not predictable with his actions.) That's all going to change now, so I can't pretend I'm not excited to see how Teddy 2.0 will shake things up moving forward. Will his attitude toward Dolores change? Is that why the Season 2 premiere found him dead in the lake alongside countless other hosts? If that plot point is to be believed, then things still aren't going to end well for Teddy. That poor guy just can't stop dying all the time, regardless of his personality apparently.

Either way, this move goes to show just how determined Dolores is to make this rebellion happen. Even if it means sacrificing those she cares about most for the greater good.