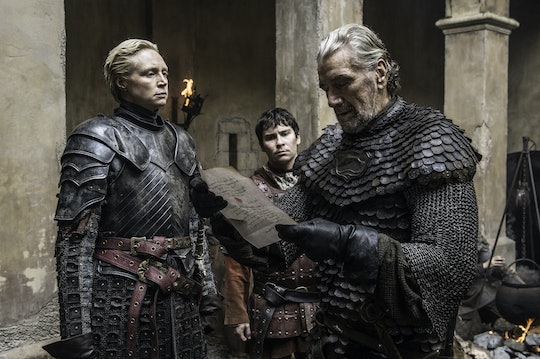 What Happened To The Blackfish In The 'Game Of Thrones' Books? The Books Have To Catch Up

In the novels, rather than attend the Red Wedding, the Blackfish had actually stayed behind at Riverrun, along with Robb's wife, Jeyne Westerling, who's name was changed to Talisa in the show. After the Red Wedding, the Blackfish continued to hold Riverrun in Robb's name and didn't back down, even when Edmure's life was threatened, just as he did in the show. He also talks to Jaime in the books and Jaime offers him the opportunity to join the Night's Watch if he surrenders. However, because Catelyn didn't trust Jon Snow, who was still Lord Commander at this point in the books, the Blackfish believes Jon was given the position by the Lannisters, and he continues to hold his ground.

When Edmure surrenders the castle to Jaime, rather than continue to fight, the Blackfish escapes by swimming under the Water Gate that had been slightly raised. Supposedly he swims down the Red Fork, and then his whereabouts remain unknown becoming an outlaw. It's possible the Blackfish will pop up in the next book, you know, if that ever happens. However, the fact that he was killed on the show could be telling if you believe the show is going in the direction George R. R. Martin has planned for the books.

Whether you read the books or not, the Blackfish's death was disheartening. Though fans didn't really have a chance to develop an attachment to him, he was an ally and relative of the Starks, and that's enough reason to be upset that he's now gone. As Bastard Bowl draws closer and closer, the Starks are going to need some new allies and fast!