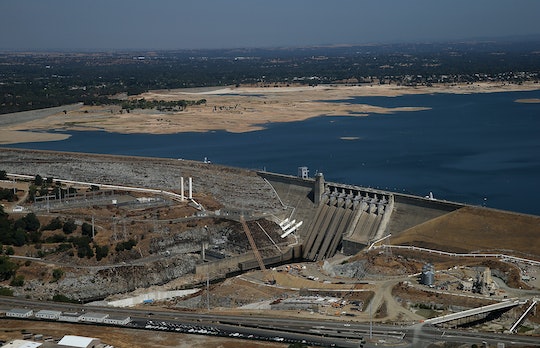 What Happened To The Oroville Dam?

Nearly 200,000 residents in several counties surrounding northern California's Lake Oroville were instructed to evacuate their homes over the weekend, after officials discovered serious damage at the nation's tallest dam. What happened to the Oroville Dam? According to CNN, the California Department of Water Resources announced last week that while the dam itself is structurally sound, erosion had caused a 250-foot-long hole in the dam's primary spillway — one of two additional channels meant to prevent water overflow of the dam when water levels are high.

That massive hole isn't easily fixable, but unfortunately that's not even the only problem. What's even more concerning is that the 48-year-old emergency spillway (a backup to the primary spillway which hadn't ever even been used until after the damage to the primary spillway was discovered Saturday) is also experiencing erosion issues. And if it, too, becomes compromised, it's possible that the surrounding towns and cities could experience massive flooding. Tensions rose Saturday and early Sunday, as water levels continued to rise, causing experts to believe the spillway would soon fail completely, according to The Los Angeles Times, but by Sunday evening, the dam's water levels began to drop, preventing excess water from being shunted to the damaged spillway. For now, that means that the situation has become less dire, but officials are continuing to encourage evacuation efforts until it is fully under control.

After almost four years of drought conditions, a series of heavy winter storms have brought a great deal of rain to the area over the past weeks, and coupled with even more water flowing in from a particularly wet season in the Sierra Nevada mountains, Lake Oroville has been approaching overflow, according to CNN. The Oroville Dam itself is nearly full — water levels were less than 7 feet from the top of the dam on Friday, according to The Independent — and officials have been scrambling to divert some of the excess water, while also trying to drop rocks into the hole on the spillway as a temporary fix.

According to NPR, the water level in Lake Oroville surpassed its full capacity of 901 feet above sea level and continued to rise, causing the excess water to pour into the emergency spillway for the first time ever. By Sunday evening, the water level finally began to recede below 900 feet, and reports suggest the levels are continuing to decrease. Weather reports are anticipating dry weather for Monday and Tuesday — another hopeful sign — but the situation could once again become dangerous towards the end of the week, when more rain is expected to fall.

In the midst of the crisis, many have wondered how the Oroville Dam even became so damaged in the first place. According to The Mercury News, concerns over the integrity of the dam and its spillways were raised by a number of environmental groups, who filed a motion with the federal government in 2005 urging that the emergency spillway be reinforced with concrete. In the motion, the groups argued that the dam "did not meet modern safety standards" and that extreme rain could lead to an overflow of water into the emergency spillway, which was at risk of being damaged by erosion.

Despite the concerns, the Federal Energy Regulatory Commission dismissed the request at the time, after the California Department of Water Resources and other state water agencies reportedly deemed the upgrades unnecessary.

Right now, at least, the good news appears to be that the situation in Oroville is not quite as much of an emergency as it was over the weekend. But for the residents who have been forced out of their homes without much of an indication of what to expect or when they can return, the possible failure of the Oroville Dam spillways continues to be a scary situation — and one that, potentially, may have been avoidable.