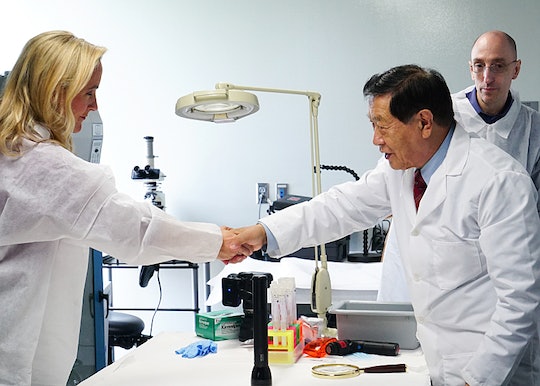 What Happened To The Ramseys' Flashlight? It Was Never Claimed

The investigators on the case of JonBenét Ramsey have struggled for 20 years to figure out not just how the 6-year-old died, but who killed her. With so few clues, the ones that do exist have been closely reexamined in CBS' special, The Case Of: JonBenét Ramsey. One item of interest in episode one of the special is a flashlight. But what happened to the Ramseys' alleged flashlight? Investigators say it was never claimed.

For a while investigators thought that it possibly had come into the Ramsey's house with a police or crime scene investigator, but those at the scene said it had been on the kitchen counter when they arrived. Still, no one ever claimed it. Since it had been found in the house, it was taken into evidence.

The autopsy revealed that JonBenét had extensive injuries to her skull and brain, which came as the result of blunt force with a heavy object. The flashlight at the Ramsey house was durable, with there large batteries in the base and investigators believe could have been used to strike the 6-year-old girl.

Investigators on the CBS special used a skull model that was approximately the same size as that of a 6-year-old girl, covered with pig skin to simulate the covering of the skull, and a synthetic blonde wig. Then, they asked a 10-year-old boy they brought into the studio to strike the skull model with the flashlight.

JonBenét's brother Burke was the only other person in the house, besides John and Patsy Ramsey, the night JonBenét was killed. Although he has never been linked to the crime, investigators have still tested theories concerning circumstances where he could have potentially been involved. That's why they asked the young boy to be part of their simulation on the show. In a statement to Romper, Burke Ramsey's lawyer, L. Lin Wood, offered the following response to any and all accusations concerning Burke Ramsey:

The investigators' experiment showed that the flashlight could have caused the an injury to the skull similar to one that JonBenét experienced. So what does this mean? Given how complex and convoluted much of the rest of the case was, perhaps everything — or perhaps nothing at all.