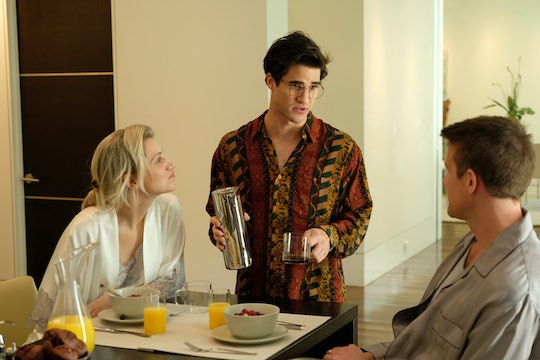 Darren Criss stars in The Assassination of Gianni Versace as Andrew Cunanan, the man who shot and killed Versace in 1997. Promos for the show make it seem like there will be a lot of focus on Cunanan's side of the story, and knowing what happened to the real Andrew Cunanan might reveal some answers about the show's conclusion. Cunanan's fate is part of what makes the story so frustrating, because his life ended before he could answer for what he did. He committed suicide shortly after killing Versace, which meant he could never explain himself or be held accountable/be officially convicted.

Cunanan was born and raised in California. The youngest of four, Cunanan was described as his father's "pride and joy" by his brother Christopher in a 1997 interview with Diane Sawyer for ABC News. Cunanan was said to be very intelligent, with Christopher explaining in the same interview, "When [Cunanan] was about ten years old, he had read the whole set of encyclopedias... and memorized it. And you could ask him any question. Pick up any edition and ask him any question, and he would tell you."

He attended the prestigious Bishop's School, where he apparently began to lie about and exaggerate the amount of privilege he had. ABC News reported that he claimed to be descended from Philippine royalty. Former FBI Criminal profiler Candice DeLong weighed in with her thoughts about Cunanan, stating: "Andrew's self-worth was tied to the finer things in life, what [people] could do for him. Being accepted in high society and by wealthy people was what he expected. If he didn't get them, he was lost."

Cunanan dropped out of college to work as an escort for wealthier, older men, according to an article by Maureen Orth in Vanity Fair. However, before he left San Diego and his murder spree began, Cunanan was reportedly down on his luck. Tim Barthel, the owner of a gay bar Cunanan frequented, told The New York Times, "He complained to friends that he was broke. He had gotten rid of his car. He was living in a dumpy apartment. All the pretenses were gone. He couldn't be the top dog anymore. He couldn't be the center of attention." Barthel then added, "Well, I guess I shouldn't say that, because he is now."

Cunanan traveled to Minnesota in 1997 to meet with his friend Jeffrey Trail and his ex-boyfriend David Madson, who became his first two victims. After murdering both of them, Cunanan began a journey around the country that finished in Miami, killing two more men in the process: Lee Miglin in Chicago and William Reese in New Jersey. It was after settling in Miami that he shot Gianni Versace, though his motives for doing so are uncertain.

Cunanan fled after killing Versace and took up residence in an empty houseboat. He remained there for just over a week until he was discovered by caretaker Fernando Carreira. Carreira had been checking the houseboat with his wife as he usually did when he noticed the lock had been jimmied and all the lights were on. He told the Sun Sentinel that he drew his own gun to investigate when he heard a gunshot, which prompted him to run out with his wife and call the police.

The shot Carreira heard was Cunanan taking his own life. His body was discovered on the second level of the houseboat by police. The gunshot wound had rendered him unrecognizable, so fingerprints were used to identify him. Cunanan did not leave a note, so the reason for his actions remains a mystery.

The Assassination of Gianni Versace will try to understand what motivated Cunanan, but executive producer Tom Rob Smith explained to Variety how they also had to fill in the gaps, because only Cunanan and his victims had the answers. "We have these tiny points of truth, and you try to connect the tissue between them, but I would never use the term 'embellish,'" Smith said.

American Crime Story attempted to stick to the facts, with Ryan Murphy telling Entertainment Weekly that the show was "a work of non-fiction obviously with docudrama elements" (though he specified that it was not a documentary). However, the Versace family has released a statement claiming it is a work of fiction and denounced the work on Maureen Orth, on whose book the show is based, as "full of gossip and speculation."

The Assassination of Gianni Versace might get into the mind of a killer, but the only people who know the whole truth are no longer around to tell it.