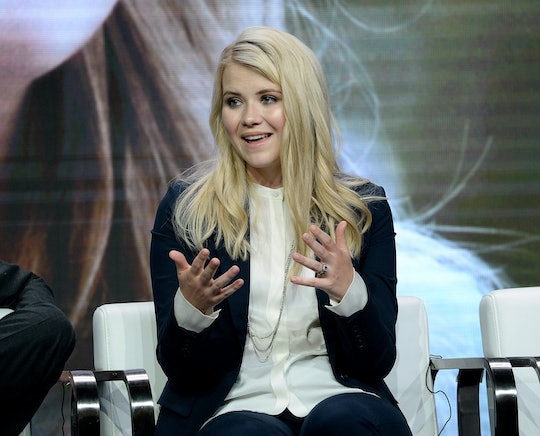 Elizabeth Smart Is Opening Up About Her Kidnapping On Lifetime

It's been 15 years since Elizabeth Smart was kidnapped from her Salt Lake City home and held in captivity for nine months before finally being rescued. Lifetime is marking the occasion with a new biopic called I Am Elizabeth Smart, which is being billed as "the definitive, authorized movie about the harrowing kidnapping of Elizabeth Smart, told from her perspective and with her full participation." So what happened to the real Elizabeth Smart? This film intends to shed more light on her story.

It's meant to be a pivot away from the last TV movie made about her experience, The Elizabeth Smart Story, which was rushed into production the same year she was rescued. Fifteen years later, and with Smart at the helm as a producer and narrator, Lifetime hopes to portray her story a little more realistically. In 2002, Smart was just 14 years old when religious fanatic Brian David Mitchell roused her from bed at knifepoint and told her to follow him outside or he would kill her and her entire family. Her younger sister Mary Katherine, who was nine years old, was the only eye witness, telling her parents Ed and Louis, "She’s gone. Elizabeth is gone. A man came and took her. He had a gun."

Mitchell, who had at one point been a homeless preacher and declared himself a prophet, took Smart to a nearby encampment also inhabited by his wife Wanda Barzee. There, Barzee forced Smart to change into robes for a religious ritual to "marry" her to Mitchell. Then, Mitchell raped her, which according to Smart's court testimony later, would happen up to four times a day for the remaining nine months of her captivity. During that time, Smart was kept tethered to a tree and sometimes forced to go without food for days at a time.

She also testified that Mitchell would drug her and give her alcohol to sedate her for sex. Once, when she got sick from drinking too much, he forced her to lay down in her own vomit all night. He'd also force Smart to watch pornography with him and then reenact the scenes with her. All the while, Mitchell used religion to justify his actions. At some point, Mitchell moved Smart to Lakeside, California, but she was rescued in Sandy, Utah. A couple there recognized Mitchell from an episode of America's Most Wanted walking with two women including a veiled teenage girl.

Police questioned Mitchell and Smart, but she gave the name Mitchell had told her to use, Augustine, and claimed she wasn't Elizabeth. Eventually, she revealed her identity to officers and was reunited with her parents. In their 2003 book, Bringing Elizabeth Home: A Journey of Faith and Hope, the Smarts confess that their daughter was unrecognizable to them when she was found. Her father said in his personal account:

She looked like a homeless girl. She was taller, bigger, more mature-looking than Elizabeth. She was unkempt. Her face was round, swollen from being outdoors in the sun. I wasn’t certain at first that it was her.

With the support of her family, Elizabeth recovered from her harrowing ordeal, calmly describing it in excruciating detail at Mitchell's trial. He was sentenced to life in prison after his 2010 conviction while Barzee pleaded guilty and testified against him.

Elizabeth went on to study music at Brigham Young University, went on a mission trip to France with the Church of Jesus-Christ of Latter-Day Saints, married Matthew Gilmour in 2012, released a memoir in 2013, had a daughter named Chloe in 2015, and welcomed her son James earlier this year. She's also worked as an activist advocating on behalf of kidnapped children and as a contributor for ABC News. Her film premieres on Lifetime Saturday, November 18.