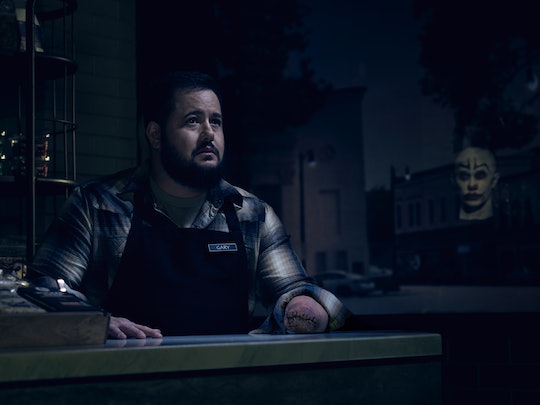 Another Iconic Cult Leader Was Featured On 'AHS: Cult'

Ryan Murphy may have taken more inspiration from real life for this season of American Horror Story than ever before. Not only is the catalyst for the season the 2016 election, but the character Kai Anderson uses the same tactics as infamous American cult leaders. In the latest episode, "Drink The Kool-Aid," AHS features one of the most famous cult founders, Jim Jones (and it's even named after a phrase popularized by his actions). Kai is even trying to follow in his footsteps. But what happened to the real Jim Jones? Kai considers him the "Kanye of leaders."

Jim Jones was the founder and leader of the Peoples Temple. He began his religious career as a Methodist student paster back in 1952, but left his church when it didn't allow African-American worshippers. His church, the Peoples Temple, began that decade in Indianapolis, Indiana. The movement grew when Jones, his wife Marceline, his "rainbow family" of adopted children, and 70 followers moved to California to find refuge should a nuclear war occur. From there, the movement quickly spread throughout the state. In 1974, a small amount of members of the Peoples Temple moved to Guyana; by 1978, the majority of Jones' followers had immigrated to the country. The community in Guyana of around 1,000 people — officially the Peoples Temple Agricultural Project — was commonly known as "Jonestown."

Jonestown is most famous for the events that occurred on November 18, 1978. California Rep. Leo Ryan came to Jonestown on an investigative mission along with cameramen and journalists. Several members asked to leave with him, which was seen from loyal members as a betrayal. They also believe this visit by Ryan and the media was an attack on them. Jones sent gunmen to kill Ryan and four other individuals, and his followers gathered in a pavilion. An audiotape from the day indicates that many agreed to die by suicide. Over 900 people died by "drinking the Kool-Aid" that was laced with cyanide poisoning. A third of Jones' victims were children; many of them died by his aides forcing them to ingest the poisonous beverage.

As for how Jim Jones himself died, he refrained from drinking his own Kool-Aid. Instead, he was shot in the head, probably by an aide, and was one of the first bodies to be identified. There were 33 survivors of the Jonestown massacre, who either fled or managed to avoid dying in the mass suicide. Because of these survivors, some details about Jonestown were revealed (though some will never be certain, as Jones and the majority of his followers perished). Apparently, members of the Jonestown cult had "suicide drills" for years before November 18, 1978. This would be a loyalty test to Jones, who called himself God. Those who fled Jonestown described it as a prison camp.

In "Drink the Kool-Aid," Evan Peters portrayed Jim Jones on that final day. It also showed that Kai takes direct inspiration from Jones (whom Kai called a "great man"). He gathered his followers and gave them all cups; when he pointed, he wanted the individual to drink. The first person refused to drink — and Kai ordered Gary to shoot him instead. Kai insisted it's "not suicide, it's a revolutionary act." One by one, they drank (including the somewhat level-headed cult women), but it turned out just to be a drill to show loyalty to Kai. Thankfully, Kai and his cult are fictional, but it's an eery reminder of the real Jones and the mass suicide he orchestrated almost 40 years ago.