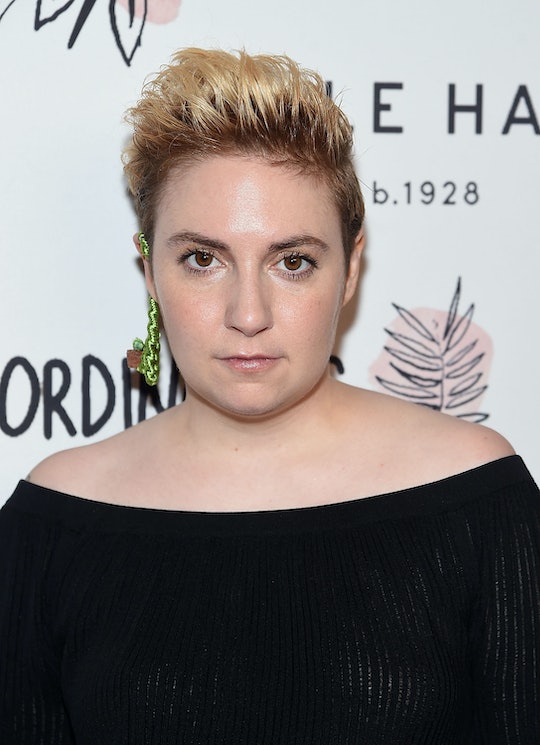 'AHS: Cult' Is Taking A Trip To The Past With Lena Dunham's Character

In the promo for American Horror Story: Cult Episode 7, "Valerie Solanas Died For Your Sins: Scumbag," viewers can catch their first glimpse of Lena Dunham playing radical feminist and attempted Andy Warhol assassin Valerie Solanas. The character is based on a real person, but it's hard to say how true to reality the episode will be before it airs. That's why it's worth asking what happened to the real Valerie Solanas — just to see if AHS: Cult stays close to the real story or will take a few fictional leaps.

The real Valerie Solanas was a controversial figure. She penned a work called The SCUM Manifesto (which stood for "the Society of Cutting Up Men") that called for the elimination of both money and men, claiming that both should be eradicated from society. While some believed her writing to be satirical, others weren't so sure, especially because she went on to commit such a violent crime. Solanas' attempted murder of Andy Warhol gained her more attention than her writing did, even resulting in a 1996 movie about the event called I Shot Andy Warhol.

It's likely to be a part of Solanas' story on AHS: Cult, too. Evan Peters will be playing Warhol in the episode, and the trailer shows Dunham-as-Valerie wielding a gun. But what brought the real-life Solanas to that point?

Solanas and Warhol crossed paths in New York City in the '60s, but even as an avowedly edgy artist, Warhol thought Solanas was a little out there. She pushed Warhol to produce her new play, but he passed on it because, according to the New York Times, he found it so obscene that he thought it might have been an attempt at police entrapment. A friend of Warhol's told the New York Daily News in 1968 that Solanas was "a strange character" and said she had "been bothering Andy a long time," calling her play "so vile and filthy it turned my stomach. Andy kept turning her off, but he was just too nice a guy to give her a complete brushoff."

When Warhol later told Solanas he had lost her manuscript, she became deeply offended. He cast her in his film I, Man but apparently that did little to smooth things over because on June 3, 1968, Solanas tried to kill Warhol. She went to the Factory, Warhol's studio, and waited for hours for him to arrive. He was accompanied by his assistant Fred Hughes, executive producer Paul Morrissey, and art magazine editor Mario Amaya. They made some small talk before a phone call pulled Warhol into another room, at which point Solanas started shooting. Shortly after the incident, Hughes described her to the Village Voice as confused and agitated. Everyone survived Solanas' attack, but not without injury.

Amaya was shot in the hip, but Warhol suffered the most damage and spent two months in the hospital after the shooting. His lungs, esophagus, spleen, liver, and stomach had all been hit in the attack. He never quite recovered, emotionally or physically, and became terrified of hospitals and surgery. Solanas turned herself in after fleeing the scene and, in the immediate aftermath, had this to say about her motive: "I have a lot of very involved reasons. Read my manifesto and it will tell you what I am."

Solanas was diagnosed with paranoid schizophrenia and spent a year institutionalized before she was deemed competent to stand trial. She was sentenced to three years for assault and possession of a deadly weapon, with one already served. Upon her release, she moved out west. Solanas died of pneumonia in 1988.

AHS: Cult might not tell her whole story, but it seems like it will explore the event that defined so much of her life.