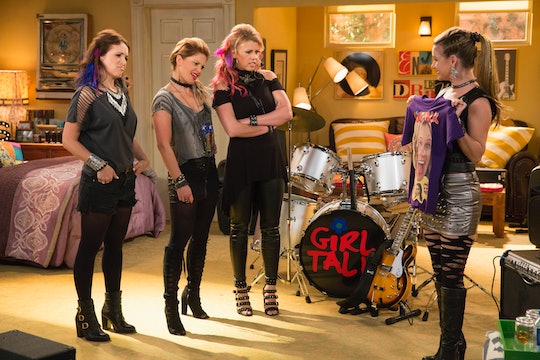 This Iconic 'Full House' Locale Deserves To Be Revisited

Fuller House returns to Netflix for part two of Season 3 on Dec. 22, but one question the reboot has yet to answer (and that I'm very curious about) is what happened to The Smash Club after Full House. For those of you who need a refresher, The Smash Club was an over-21 club where Uncle Jesse and his band, Jesse and the Rippers, used to play in their heyday. (In the mythology of the show, it was apparently also where acts like Jefferson Airplane, The Mamas and the Papas, and Sonny and Cher got their start, even though the kids have never heard of any of these bands.) When the club's owner Buzz Markel (who bears a suspicious resemblance to Uncle Joey) died, Jesse ended up inheriting the venue, which had been closed for two years and was in a state of disrepair.

After seeing D.J., Steve, and Kimmy hanging out bored after school one day, Jesse hatched the bright idea to try reopening The Smash Club as a kid-friendly, alcohol-free, all-ages venue. Of course, he knew next to nothing about opening a restaurant, renovating a commercial space, bringing an old building up to code, or how to go about securing a loan to make all of the above happen. In fact, he almost messed it all up with his lack of preparation before meeting with a loan officer. But as luck would have it, she used to dance at The Smash Club of yore under the name Ginger Snap — and Jesse's earnest, entrepreneurial spirit tugged at her heartstrings. Out of nostalgia and fondness for the club as she remembers it, she decided to grant Jesse the loan, and he was able to reopen the club.

Of course, multiple disasters ensued, including a malfunctioning espresso machine on opening night and a booking snafu that involved accidentally hiring a band of septuagenarian triplets named Renee, Esther, and Martha instead of the, at the time, very popular band REM. Furthermore, D.J. and Kimmy, who were supposed to work as waitresses, were no-shows and Jesse was forced to hire Stephanie and Michelle to replace them. Michelle was literally eight-years-old at the time, so it's not totally clear to me how child labor laws worked in San Francisco in 1993. But apparently, this flies. Other memorable highlights from the original series that take place at The Smash Club include a cameo appearance by Ben Stein, who played a cynical restaurant critic named Elliot Warner.

The Smash Club appeared in several episodes and was continually referenced throughout the remainder of the original Full House. We haven't heard much about it in the reboot, but since Becky and Jesse live in Los Angeles now, it's safe to assume he isn't quite as hands on with the venture. Whether it's still in his name or he's since sold it remains to be seen. Presumably after all that hard work and the whole family pitching it to get it on its feet, The Smash Club still has a special place in the extended Tanner family's heart.

From a production perspective, though, we know that the Fuller House writers love to pepper the series with song-and-dance numbers, given the musical talents of much of the cast. It would make perfect sense to bring the club back for one of the many performances Fuller House seems to have no trouble justifying. We've already seen a Girl Talk reunion from D.J., Stephanie, Kimmy, and Gia, but we have yet to see Jesse and the Rippers get back together. Seems like The Smash Club could be the perfect setting.