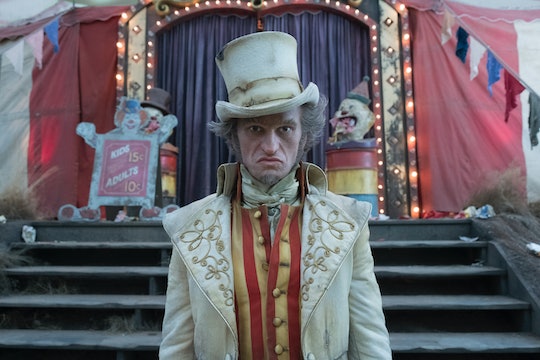 Warning: Season 2 Episode 9 spoilers ahead! As Season 2 of A Series of Unfortunate Events progressed, both the audience and the Baudelaires began to discover more information about the V.F.D. The penultimate episode of the season even flashed back to one of the secret organization's past parties, giving viewers glimpses of all the members in their heyday. One significant member was a mysterious person in a dragonfly costume who seemed to be in imminent danger. But what happened to the woman in the dragonfly costume on ASOUE?

Every clue appears to indicate that the person in the dragonfly costume was Beatrice, who is the mother of all three Baudelaire children. However, the identity of the woman in the dragonfly costume is left fairly ambiguous in that their face is never shown, which could leave the door open for it being someone else. This show is not above a red herring or two, so even if all signs point to Beatrice, one should leave a margin for error when trying to identify the unknown figure.

Still, "The Carnivorous Carnival: Part One" goes out of its way to make the audience believe that the woman in the dragonfly costume is Beatrice Baudelaire, so that does appear to be the most logical explanation.

During the beginning of the episode, while the V.F.D. were enjoying their party, Lemony Snicket received a secret missive in his drink that read only "Olaf knows." He immediately went into a panic, dropping his root beer float and rushing out onto the balcony, where he was just in time to see a dark figure approaching a woman in a dragonfly costume below. He yelled out for Beatrice, but the scene cut away before anything more could happen.

But perhaps the most telling moment was later in episode during Lemony's narration. He mentioned that "a woman in a dragonfly costume will set off a series of unfortunate events by stealing a sugar bowl." At this point in the season, viewers have heard a lot about the strange sugar bowl that Esmé Squalor wants to get her hands on more than anything. She's mentioned several times that it was stolen from her by Beatrice, though in previous episodes Lemony claimed that he was the one who stole the sugar bowl from Esmé.

Lemony and Beatrice could have been acting together to commit the crime that started everything, of course. But the most important detail here is that audiences know Beatrice was involved in the theft, so she must be the woman in the costume too.

That does raise even more questions, however. Whatever Count Olaf knew obviously put the person in the dragonfly costume in a dangerous position based on Lemony's reaction, but if it is absolutely Beatrice, then nothing happened to her at the party because she went on to live for many years and have three children after that. And what exactly did Olaf know? Maybe he discovered that Beatrice and Lemony absconded with the sugar bowl, though he's never seemed to care about that as much as Esmé does.

But it's possible the thing Olaf knew was much darker. In the books, it was revealed that Olaf's parents were killed and some fans have theorized that the Baudelaire parents were involved in the assassination. If that's the case, then perhaps Olaf discovered the truth and that has been motivating all of his actions ever since. It's a pretty good rationale for vengeance.

It seems the identity of the woman in the dragonfly costume is only a small part of the mystery. Though the Baudelaire children find out more about their parents' lives with every passing episode, there is still so much left unknown.