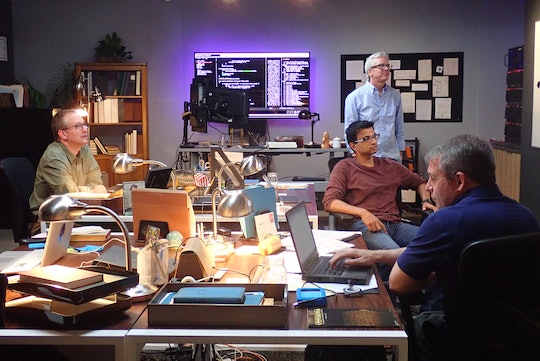 The Zodiac Killer Remains A Mystery To This Day

To continue with our national obsession with serial killers, murder, and all things terrifying, the History Channel is airing a new documentary series called The Hunt For The Zodiac Killer, which premieres on Tuesday, Nov. 14. But while you may be familiar with the name itself, what happened to the Zodiac Killer remains unclear even to this day. Despite all the evidence gathered, the killer was never caught and the case remains open. This new series purports to investigate the crimes anew and catch the real killer once and for all.

There have been a lot of theories about the identity of the Zodiac Killer over the years. One of the most ridiculous was a conspiracy that Ted Cruz was actually the Zodiac Killer. Just so we're clear, Ted Cruz was born in 1970. The murders definitively linked to the Zodiac Killer happened in the 1960s. So yeah, that theory is a bit unlikely. Some slightly more credible theories have been posited, however. One man, Gary Stewart, claimed forcefully that his estranged biological father, Earl Van Best Jr. was the killer, though this has never been proven by investigators.

The evidence presented by Stewart is pretty intriguing, for what it's worth. According to his claim, the coded letters and ciphers sent by the Zodiac killer to police contain his father's initials. He also claims that the handwriting he found on his marriage certificate matches that of the Zodiac's. Furthermore, the police sketch released of the killer does look an awful lot like a photo Stewart provided of Van Best. That said, none of this evidence is conclusive and police have said they would investigate the claims, but could not comment because it was an ongoing investigation.

Regardless, Stewart wrote a book about the case, called The Most Dangerous Animal of All. If Van Best was the Zodiac Killer, the world needn't worry about him. He died back in 1984.

The Zodiac Killer claimed responsibility for several murders in the 1960s and early '70s in letters sent to the San Francisco Chronicle and to the police department. He seemed to hint that he killed at least 37 people, though only five have been positively attributed to him. In his letters, the Zodiac Killer claimed that by cracking the cipher, one would be able to identify him. But nearly 50 years later, his identity has still not been determined. No one knows where he is at this point or what became of him.

The evidence compiled presents a disturbing portrait. Two of Zodiac's intended victims actually survived their injuries, and were able to provide a description of the attack. The Zodiac Killer is described as a white male, who wore a hood covering his face and a black shirt with a white crossed circle symbol on the chest. This symbol was also on the letters the Zodiac sent to police and to the newspaper. Unfortunately, that is all the description that is available about the killer, and it wasn't enough to identify a suspect.

Nobody knows his name, how old he is, or where he is from. Nobody knows definitively how many victims he claimed, where he is now, or even if he's still alive. The chilling letters stopped arriving in 1974, and no new victims were ever claimed. Perhaps the killer died years ago. Perhaps he's living peacefully somewhere far away. Perhaps he's right under investigators' noses, just biding his time. Maybe this History Channel series will crack the case. Or maybe we'll never know.