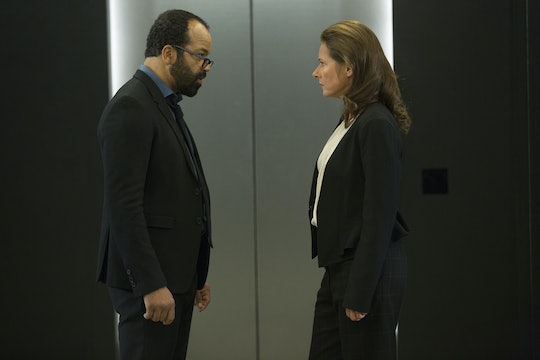 What Happened To Theresa On 'Westworld'? Her Fate Proves That Ford Is Dangerous

Theresa Cullen has been one of the most enigmatic characters on Westworld since the series began seven episodes ago. Her frosty, domineering, and no-nonsense exterior made it seem like she might rise up to be a larger villain within the show's mythos. Unfortunately, for those viewers who would have liked to see Theresa's role in this robot revolution expanded upon, her storyline has been cut short as of the most recent installment of the series. But exactly what happened to Theresa on Westworld?

Despite the fact that Westworld is a bloody and dangerous place, we've gone six episodes without seeing any "real" bloodshed. Every time we've seen a host meet a gruesome end, the emotional impact has been cut somewhat – because they are, after all, robots, and they'll be cleaned right up and back in working order in no time. They can't permanently die unless they are deactivated or destroyed – and even then, we don't know whether their minds are backed up on a flash drive somewhere, able to be "reborn" in a new body.

"Trompe L'Oeil" changed that status quo, when we finally saw two apparently-permanent departures. Both were the result of "necessary blood sacrifices" to further larger agendas, and both were absolutely horrifying.

If you haven't caught up on 'Westworld,' stop reading here because major spoilers for the season follow.

After spending the episode conspiring with Delos Board Executive Director Charlotte Hale to oust Ford, Theresa met a gruesome and violent end at the hands of Bernard. If anything, this installment of the series underscores that Ford shouldn't be messed with – whatever his larger goal is, he is willing to kill to forward it.

Theresa and Charlotte made the mistake of crossing Ford when they set him up to take the fall for a host's violent turn, with the intention of forcing him to retire. They rigged Clementine Pennyfeather's code to cause her to viciously attack a fellow host who had earlier attacked her, demonstrating the supposed "danger" of the hosts retaining memories from prior builds. Rather than coming forward and taking responsibility for the revery coding that Theresa and Charlotte falsely claimed was causing the violent outbursts, Ford allowed Bernard to take the fall and Charlotte fired Bernard. Clementine, for her part, was taken away to be robo-lobotomized – meaning that the Clementine viewers know is likely gone forever.

Later, Bernard brought Theresa to the secret, off-the-grid cottage where Ford was keeping the robot replicas of his family sequestered. Though it seemed like Bernard might have been doing this in order to turn on Ford and clue Theresa in on what Ford was up to, it turned out that Bernard was luring Theresa to her death – on Ford's orders.

When the two ex-lovers found the secret lab beneath the secret cottage, Theresa discovered that Ford had been making undocumented (and unmonitored) robots for an undisclosed amount of time. Those covert androids included the younger Robert robot, a Dolores prototype – and Bernard himself. Bernard was (and apparently remains) unaware of the truth about his robot status, but that didn't stop Ford from effortlessly commanding him and forcing him to kill Theresa by emotionlessly bashing her head against a wall.

How will Ford explain Theresa's disappearance away? My initial thought was that, rather than allowing everyone to believe Theresa had just vanished, he'd do something much more sinister – create a Theresa robot to take the real Theresa's place. This idea makes a disturbing amount of sense, especially given how the scene was framed. As Bernard killed Theresa in the background, Ford's machinery worked on building a brand new host-body – one that could easily be made to look like Theresa. We also know that, given the existence of Ford's host-family, he has no qualms about creating robots to take the place of real people.

This is a major, game-changing moment, not only because it represents the first on-screen human death of the series but because it fundamentally changes everything we think we know about the hosts. Bernard, a Westworld robot, has killed a human – something we've been repeatedly told that the android hosts are not able to do. Viewers still don't know exactly what Ford is up to with his secret robots, but one thing is for sure: Ford's undocumented hosts, able to slip in undetected among ordinary humans, are far more dangerous than anyone could have imagined.