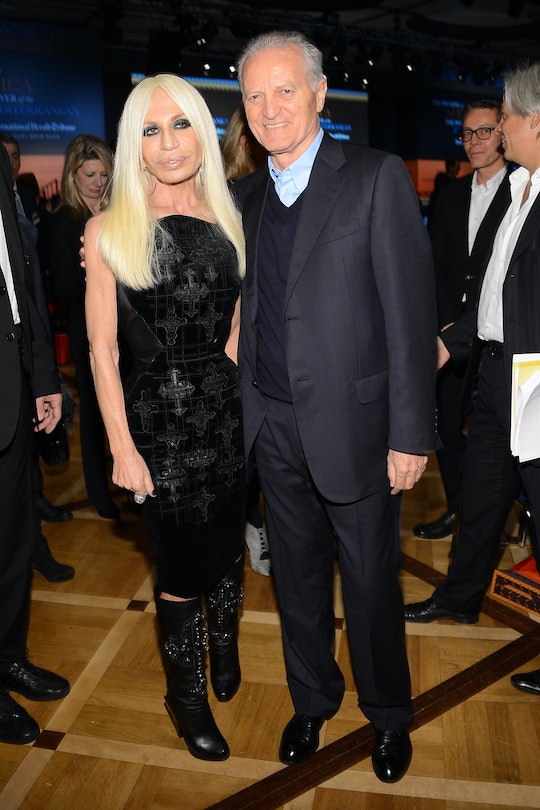 Dontella Versace might be the most memorable member of the Versace family (closely followed by the late Gianni, whom some might not recall as clearly if they weren't fashionistas in the 1990s), but she's certainly not the only member. She and Gianni were joined by an older brother, Santo, and a sister, Tina. But what happened to Tina Versace was both sudden and tragic, because her life was cut short so abruptly.

Her given name was Fortunata, according to Deborah Ball's House of Versace, but she was apparently called Tinuccia as a nickname and Tina for short. The eldest of the Versace siblings, Tina died when she was still very young. It doesn't seem as though the Versace family has commented much on her death, though Donatella did mention it briefly in a 2007 New Yorker profile. According to the article, the family has attended a carnival together when 12-year-old Tina fell and scraped her knee. She became ill with a tetanus infection and the family sought medical attention, but Tina was apparently given the wrong treatment. She died less than 24 hours later, "still in her party dress."

In the New Yorker piece, Donatella said of Tina's passing, "Sudden death is frequent in my family." Many years after Tina died, Gianni would be killed in a shocking, seemingly random shooting by Andrew Cunanan, a crime that serves as the starting point for FX's The Assassination of Gianni Versace. But Gianni's murder wasn't the only tragedy the Versaces suffered through.

It seems as though Tina's death weighed on the family as a whole and Donatella specifically, at least according to Yahoo!. The two sisters never got a chance to know one another because Donatella was born in 1955 and Tina died in 1953, but Donatella was still aware of her parents' deep sadness growing up. In House of Versace, Ball wrote that their mother Franca Versace was "inconsolable" after Tina's death.

In an interview with Britain's Harper's Bizarre, as reported by Yahoo!, Donatella spoke of feeling like a replacement for Tina even though she knew her parents loved her. "I felt when I was little, 'Oh, I'm going to have to fill someone else's place,'" Donatella is quoted as saying. "This was why I was born as a baby, because my parents couldn't get over the loss of my sister, who I never met. See, I'm telling the truth finally... It gave me a little bit of insecurity, because my mother never recovered."

Unlike Donatella, her brothers Santo and Gianni did grow up alongside Tina for a time, though they were around 9 years old and 7 years old, respectively, when she died. It doesn't seem as though either spoke of the impact Tina's death had on them, but the Versace family has always presented the appearance of being very close and it seems the siblings grew to rely on each other over the years. They all became involved in Gianni's fashion empire as well, with Santo taking on the business end while Gianni and Donatella handled the creative aspects.

The Guardian quoted Donatella describing their dynamic by saying, "There was Santo, the calm one; Gianni, the enfant terrible, and me — Gianni's accomplice."

The Versace family appears to have mostly remained quiet on the topic of Tina's death. Perhaps they chose not to discuss it because it was so painful for them, or even because it happened so long before they became public figures that there was no need to bring it up to the press. It's impossible to say without a statement from the Versaces themselves. All one can do is respect their privacy on the matter.