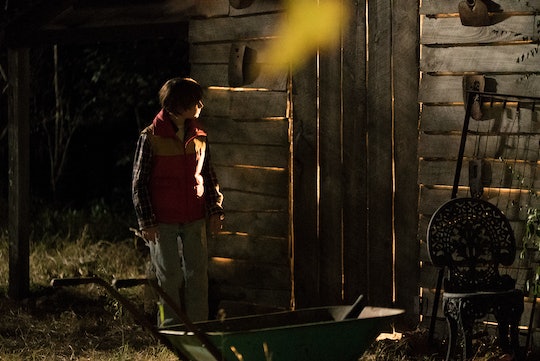 What Happened To Will Byers In 'Stranger Things'? He Sets The Plot In Motion

(Warning: This post contains spoilers from Episode 1 of Stranger Things.) Netflix's Stranger Things lives up to its name: from the very first moment, bizarre and unusual things are occurring. Of huge importance to the plot is a young boy named Will Byers (Noah Schnapp), a normal kid with normal hobbies and normal problems. He plays Dungeons and Dragons with his best friends and hangs out with his big brother. He has a deadbeat dad and a mom (Winona Ryder) who has to work too much, but that's something a lot of kids have to deal with. There's clearly a lot of love in his family, so when something happens to him, it has devastating effects. But what happened to Will Byers on Stranger Things?

After a night playing D&D with his friends, Will heads home to find his house is empty. Something seems to be going on, too; though the audience doesn't see his assailant, Will is definitely being followed by someone – or something. He's visibly terrified as he heads out to his shed and loads up a gun for protection, but it's too late. A lightbulb glows ominously, much too bright, and then in the blink of an eye Will is gone. The shed is empty. Will disappears without a trace, leaving behind a trail that seems to go cold fast.

Will's family doesn't notice his disappearance until the following morning when it comes time to get him ready for school. His mother, Joyce, had been working the night he disappeared, and so had his older brother, Jonathan; they weren't supposed to have shifts at the same time so that someone would always be around for Will, but it's clear the family needs the money. It just so happens that tragedy struck the one night neither of them were there to prevent it.

There are precious few clues as to where Will has gone, too. His deadbeat dad isn't returning any calls, and the only piece of evidence police find is Will's abandoned bicycle. It seems obvious that something not quite normal has contributed to Will vanishing, but the show doesn't answer any questions in the first episode – not that anyone would have expected it to. Will's disappearance could have something to do with the unseen foe that sucks a scientist up an elevator shaft in the episode's opening scene, but that's not the only mystery afoot. There's also the young girl of unknown origins who appears seemingly out of nowhere with a buzzed head and wearing a hospital gown, saying very little.

What happened to Will has lasting repercussions for everyone in town. His family is wrecked by it, his friends flummoxed, and the local police at a loss. However, Will's disappearance is just the start: there are stranger things yet to come.