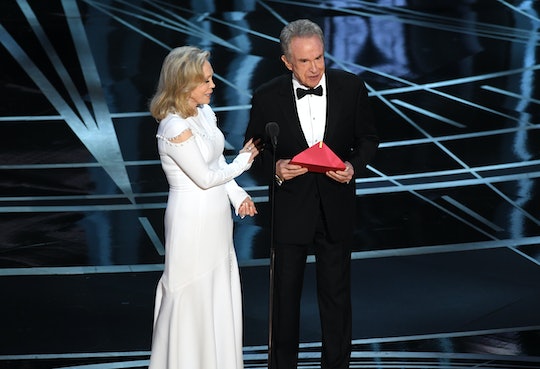 It's rare, but every so often awards shows make mistakes. Whether it's a production mishap, a teleprompter glitch, or a curse word accidentally slipped into an awards acceptance speech, viewers tend to laugh it off and move along. But this year's Academy Awards had arguably the biggest straight-up mistake in the show's 89-year history. So what happened with the best picture announcement at the 2017 Oscars?

To cap off an evening that went largely as expected (despite La La Land taking home less awards than anticipated), Warren Beatty and Faye Dunaway took the stage to announce the winner of this year's award for best picture. In what (at the time) seemed like an attempt at humor, Beatty took a very long time to read the name of the winner off of the card. He even glanced at Dunaway repeatedly as he was reading it and pausing, as if looking for help. But in the end, they read off La La Land as the winner of this year's big award of the night.

Unfortunately (for the La La Land team, anyway), as it turned out, they had accidentally read off the wrong name. And nobody figured out the mistake until La La Land's producers were onstage accepting the award on their movie's behalf. Watching the Oscars producers swiftly swarm the stage and quickly inform the La La Land group, literally mid-speech, was incredibly awkward. But the producers of the wrongly-named film handled the mistake with grace and dignity.

La La Land producer Jordan Horowitz held up the envelope with Moonlight's name on it to prove that the mistake was legit and said that he was proud to hand over the award to the Moonlight team. At first, everyone thought that it was a joke (as you would, with a major mishap like this), but once the truth was understood, the audience erupted into raucous applause on Moonlight's behalf. Meanwhile, a very nervous and guilty-looking Warren Beatty stood awkwardly off to the side.

As the 79-year-old actor explained before the Moonlight team took the stage to accept the award, he'd been handed the wrong envelope — he had the one for the Best Actress winner. "I want to tell you what happened," Beatty explained to the crowd. "I opened the envelope and it said Emma Stone, La La Land. That’s why I took such a long look at Faye and at you. I wasn’t trying to be funny."

Eventually, Barry Jenkins, the director of Moonlight, and the rest of his group came to the stage to accept the award that was rightfully theirs. It was doubly unfortunate because, as actress Jessica Chastain pointed out via Twitter, the moment was ruined for both La La Land and Moonlight. She criticized the Academy Awards producers for not reacting quickly enough to stop La La Land from taking the stage and correcting the mistake earlier.

Kimmel tried to course correct and laugh off the screw-up, taking the blame for it in the final moments of the show. But regardless of who was at fault, one thing is for sure — the 2017 best picture announcement will absolutely go down as one of the most memorable moments in Oscars history.