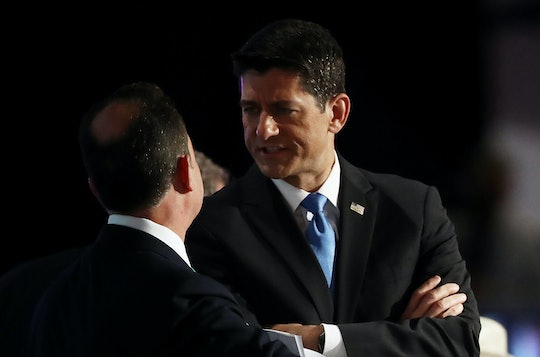 What Happens If A Presidential Candidate Drops Out? Trump's Comments Prompt Questions

Now that a video and audio recording of Donald Trump joking about groping women, grabbing their genitals, and ogling a soap opera actress' legs, many high profile Republicans are disavowing their nominee. But what happens if a presidential candidate drops out anyway? There are only 31 days until the election and some states have already begun early voting, so the situation is very complicated. But the fall out is very real and the GOP is going to have to do something about Trump (or so one would hope). On Friday, Speaker of the House Paul Ryan uninvited the nominee to an event in Wisconsin. Carly Fiorina has called for the GOP to put vice presidential running mate Mike Pence on the top of the ticket. Others have said that they will write in Mike Pence on election day. Top Republican senators, like South Dakota Sen. John Thune, have called for Trump to withdraw.

In the meantime, Pence has issued a statement saying that he will not defend his running mate's words and hopes that he will "show his heart" at the debate tomorrow by asking forgiveness. But Pence also pulled out of campaign events on Saturday voluntarily instead of going to represent the candidate.

Chaos might ensue. But replacing the candidate, or getting him to quit (which Trump has said he will not do) at this juncture won't be easy. Here's how it could go down, with lots of confused puppies, because seriously, we're all just confused puppies at this point.

They Can't Replace Him On The Ballot

There are rules to replace a candidate on the ballot due to death or other extreme circumstances, according to the Republican National Committee rule #9. They could have done it months ago. It would require the RNC to hold another convention and have all of the delegates vote again. Or, the RNC could gather its 168 members and they would vote on a new nominee, with votes being divvied up state by state, according to population. But rule 9 only works if they have to fill a vacancy, and Trump doesn't seem to be backing down. Anyway, it's too late.

But early voting has already begun in some states and every single state has different rules about when a candidate can withdraw their name. Some states require that candidates do so around three months in advance, some have looser guidelines. But it's too late to reprint ballots in most states (even if a candidate dies or gets sick, this is a problem for state ballots, and one time Missouri elected a dead man). Even if the RNC leaders discuss backing another candidate for president, Trump's could be on the ballot in some states and not, if he does withdraw, on others.

The Electoral College should be the bane of every American voter's existence. This is where things will turn into a complete legal mess. As you might remember from high school civics (or the 2000 election that went to the Supreme Court), theE Electoral College really elects the president when they vote in December. Those rules, too, are confusing and vary state by state. Some states require that the Electoral College members vote according to their party — so if Trump is still on the ballot, they could be tied to him.

It Gets More Complicated

There's something called the Twelfth Amendment and there's a little line that goes like this: "the Electors shall meet in their respective states and vote by ballot for President and Vice-President.” That can be interpreted, though it never has been by a court, that it's up to this Electoral College all alone to choose the candidates they vote for. So, the RNC could suggest another two candidates for president and vice-president and the Electoral College could just do whatever they want. That, too, would mean a lot of legal work to get around the state statutes mentioned above about the rules the members have to follow to vote for president. It would be a drawn out, high stakes legal mess.

It's high stakes because the RNC could literally start questioning some longstanding rules about the voting process just to get out of the mess they've made for themselves by nominating Trump in the first place. Trump has basically grabbed the American electoral system by the you-know-what and thrown some longstanding procedures and laws into question.

Or maybe throwing everything up in the air is the best way to make America great again. You would not want to be a Republican party leader this weekend, trying to figure how to get the GOP out of this mess and somehow not just hand the election over to the Democratic nominee, Hillary Clinton. Or maybe not. Some insiders have noted that Pence could have an edge on Clinton if Trump is out of the picture. Everything is up in the air at this point.

It was likely, given Trump's own insinuations, that the 2016 election results would be contested at some point by Trump's campaign. But no one could have (or could they have?) predicted what a Constitutional mess November's election might bring.