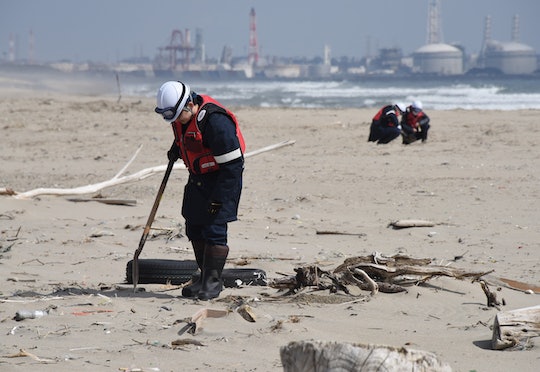 What Happens If A Tsunami Hits Fukushima? The Region Was Just Hit By Another Large Quake

A major earthquake hit the east coast of Japan in Fukushima on Tuesday morning, prompting officials to issue a tsunami warning for waves of up to 10 feet high in the area. But what happens if a tsunami hit Fukushima? The region is on high alert after a similar series of events caused severe devastation just five years ago in 2011 that killed almost 19,000 people.

More Like This
Wait, Did The Government Actually Do Something For Parents?
Bindi Irwin Has Been Sharing The Cutest Photos Of Her Daughter
The Bates Family Keeps On Growing: Get To Know All 19 Kids Here
Everything You Need To Know About The Proud Family Reboot Coming To Disney+

According to Bloomberg, the Japan Meteorological Agency warned people along the coast to move to higher ground after the 7.3 quake (the U.S. Geological Survey measured the magnitude at 6.9) struck the region around 6 a.m, with a depth of only 6.2 miles, which is considered a shallow quake and adds reason for concern as they can cause more destruction because they're so close to the surface.

Following the quake, Japanese public broadcaster NHK told people to evacuate the area immediately until the warning is cleared, reminding listeners that Fukushima, which is the home to the nuclear power plant, was site of the earthquake-spawned tsunami, which killed scores of people in 2011.

The expected tsunami is expected to reach similar wave heights as the savage tsunami in 2011 caused, ranging between 10-24 feet or higher in affected areas. Many residents are still recovering from the natural disaster, leading many to worry about what might happen if a strong tsunami hits again.

Since the 2011 tsunami, scientists have had years to develop a better understanding as to how to help prevent such devastating fatalities from happening again. But some damage to infrastructure, vegetation, and natural resources are probably not be as avoidable.

Some people are concerned about the risk of nuclear material leaking into the air and oceans. With Fukushima as the home to the first nuclear power plant, there is reason to worry about what another tsunami might bring. According to CNN, it wasn't until 88 days after the 2011 disaster that the Japanese government admitted that a nuclear meltdown had taken place, which was the worst nuclear disaster since the 1986 Chernobyl incident and has left a huge area of land unusable for decades.

Marine radiochemist Ken Buesseler from PBS wrote in March that "radiation continues to seep into the Pacific Ocean."

He continued, "It is incorrect to say that Fukushima is under control when levels of radioactivity in the ocean indicate ongoing leaks, caused by groundwater flowing through the site and, we think, enhanced after storms."

Although the affects of the 2011 tsunami are still unfolding, luckily in the immediate aftermath of the most recent earthquake on early Tuesday morning local time, there have reportedly been no abnormalities observed at the nuclear power plant and there were no immediate reports of damage or injury since, according to Bloomberg.

Japanese authorities are using extreme caution by urging residents to evacuate the area until the tsunami warning is cleared, which will hopefully prevent any loss of human life. But another tsunami could set back years of work to rebuild the region and it could be another devastating disaster for the planet.