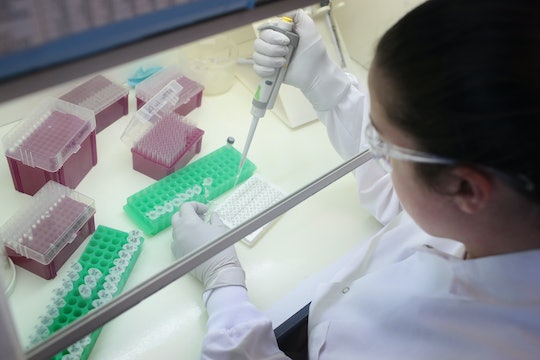 What Happens If Congress Doesn't Approve Zika Funding? It Could Slow Vaccine Development

With mosquito season in full-swing, state and local governments are trying to do their to best stay on top mosquito control efforts in order to minimize the potential for outbreaks of the Zika virus. But that could all come to a halt shortly if Congress fails to approve further funding before breaking for a seven-week summer recess this Friday, according to USA Today. What happens if Congress doesn't approve Zika funding? Without continued funding, states will have a hard time ensuring adequate mosquito control, which is an important part of Zika prevention. It also means that the work currently going into vaccine development would be put on hold. And without a vaccine, the only options individuals have to try and stay safe are taking precautions to avoid sexual transmission, using bug spray, covering exposed skin, and staying indoors in the hope that they won't get bit by a Zika-carrying mosquito. (Not exactly ideal.)

According to USA Today, President Obama first asked Congress to approve $1.9 billion to fight Zika in February. The World Health Organization deemed the virus a "public health emergency" following the devastating outbreaks in countries like Brazil, which resulted in a sharp rise in the number of infants born with severe microcephaly, a birth defect that interferes with brain growth and can cause complications like "intellectual disabilities, seizures and problems with speech development."

Despite his request, there seems to be little agreement between Democrats and Republicans about whether the funding is actually warranted. So, instead of granting specific funds for Zika, Congress recommended the Obama administration divert approximately $589 million in money that had originally been earmarked for Ebola to Zika mosquito control and vaccine development. That provided states and local governments with a temporary solution, but Health and Human Services Secretary Sylvia Mathews Burwell told USA Today that that funding will run out in "late July or early August" — a real problem given that no decisions have yet been made about how to fill in the gap.

The good news, so far, is that none of the confirmed Zika cases in the continental U.S. have been locally-transmitted. According to the Centers for Disease Control, there have been 1,133 reported cases of Zika (not including U.S. territories), but almost all of them are travel related (one was lab-acquired). Out of those cases, 14 of them were sexually transmitted. But that, of course, doesn't mean that locally-transmitted cases could begin cropping up at any time, and without continued funding, it could happen sooner rather than later.

Dr. Anthony Fauci, director of the National Institute of Allergy and Infectious Diseases, has been overseeing development of a vaccine program for Zika and worries that, without continued funding, it will be hard to stop an eventual outbreak.

“Outbreaks occur,” Fauci said, according to The Miami Herald. “And if you find out you’re behind it as opposed to ahead of it, things are worse than they could’ve been.”

According to Reuters, President Obama said earlier this month that "the good news is we feel fairly confident that we can develop an effective vaccine for Zika." The problem, of course, is that the summer recess is fast approaching, with little progress in terms of providing additional funding. And although Obama said he "[expects] Congress to get this funding done before they adjourn, as part of their basic responsibility," it's not looking particularly likely to actually happen.

And that's something that Fauci says could be a really bad decision, according to USA Today.

The idea that this won't affect me because it's not happening right now in my state — it's just foolhardy to think that, especially with all the travel that goes on in this country.

Without a decision this week, further discussion will be on hold until members of Congress return Sept. 6. Which, TBH, feels a long way away given that a virus that can cause major birth defects is involved.