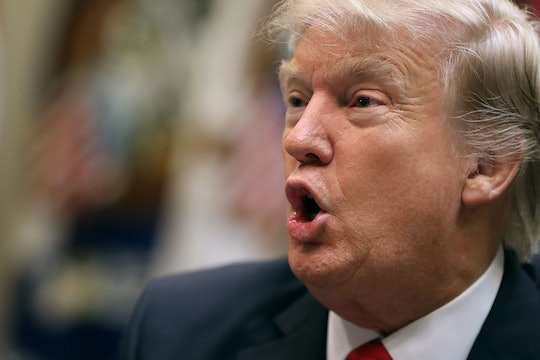 President Donald Trump is set to announce his nominee to fill the empty seat on the Supreme Court on Tuesday night. (Ever the showman, the president will be announcing his pick on live television.) But this nominee isn't likely to be confirmed without a fight. So what happens if Congress refuses to consider Trump's Supreme Court pick? Things could get nasty or, to be more precise, nuclear.

The seat in question has been open since Antonin Scalia's death in early 2016. President Barack Obama nominated Merrick Garland, a respected and experienced moderate, to fill the seat, but in an unprecedented and wildly controversial move, Senate Republicans refused to even consider Garland. So now that Trump is in power, Democrats are threatening to return the favor and filibuster Trump's nominee unless Trump nominates Garland. (He won't.) According to Politico, Senator Jeff Merkley, a Democrat from Oregon, confirmed his intention to filibuster Trump's Supreme Court pick, saying, "This is a stolen seat. This is the first time a Senate majority has stolen a seat. We will use every lever in our power to stop this." If a Senator rejects a simple vote and requires a supermajority, as Merkley intends, he will need 41 Democrats to join him for the move to be effective.

So the United States could continue to be stuck with an eight-person court, except for the fact that the Republicans, as the majority in the Senate, have a weapon in their arsenal that the Democrats did not, the so-called "nuclear option."

Through the "nuclear option," a simple Senate majority can confirm appointments, rather than such appointments needing a supermajority of 60 votes. Former Senate Democratic Leader Harry Reid triggered the nuclear option back in 2013, in order to push through Obama's judicial and executive nominees, who were being held up by Senate Republicans. (The nuclear option at the time excluded Supreme Court appointments, who still required a supermajority.) Now, however, that precedent may be used to help Trump's Supreme Court nominee slide through.

And just who might that nominee be? Those in the know are widely speculating that Trump will pick Thomas Hardiman, a conservative judge very much in the mold of Scalia, although the president is reportedly also considering Neil Gorsuch or William H. Pryor Jr., who once called Roe v. Wade "the worst abomination of constitutional law in our history."

Whoever Trump ends up picking won't be confirmed without a fight. But, unfortunately for many liberals, the eventual nominee is ultimately pretty likely to be confirmed in the end, thanks to the nuclear option.