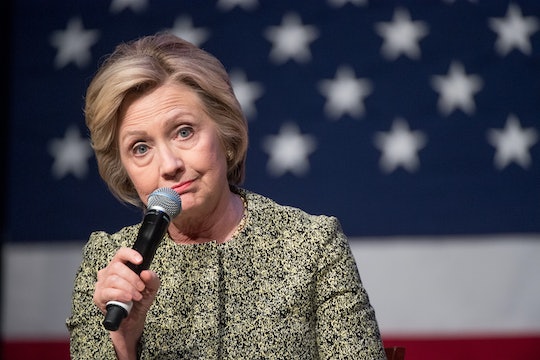 What Happens If Hillary Clinton Loses New York? It's Unlikely, But She Needs A Win

The pressure is on for former Secretary of State Hillary Clinton to start winning primary contests again and New York is predicted to be the start of a new hot streak. Clinton has lost eight of the last nine state contests to her rival Vermont Sen. Bernie Sanders. But, as the former Senator representing New York, Clinton has a big advantage in the Empire State Democratic primary. But what happens if Hillary loses New York? It's pretty unlikely, but a New York loss would be a huge setback for the Clinton campaign.

Why? Because Clinton can't just eek out a win, she needs a slam-dunk decisive victory over Sanders to prove she's got the kind of support she needs to beat Trump in the general election. Sanders is trying to convince Democratic super delegates to change their allegiance to him by demonstrating he is the stronger candidate to take on the Trump train.

The polls show Clinton is holding onto a 12- t0 14-point lead over Sanders. But despite the double-digit lead, Clinton is still out on the campaign trail swinging hard at Sanders, questioning his preparedness to be president, pointing to his flub of a question about breaking up the banks in a newspaper interview. Clinton is also going after Sanders on his position on guns.

But is her hard-nosed campaigning against Sanders necessary to prove she's tough, or is she simply alienating Sanders' supporters with her attacks? Thirty percent of likely Democratic Sanders supporters, according to NBC News, say they would not be willing to vote for Clinton in the general election. Will Clinton be able to keep going after Sanders and still unify the party behind her? That's the critical calculation her campaign is in the midst of trying to triangulate.

But Sanders has been coming out swinging with his own barrage of attacks ranging from saying Clinton doesn't have the "judgement" necessary to be president, pointing to her disastrous vote for the Iraq war during her time as Senator, and her decades-old support of the 1994 Crime Bill during her husband's administration.

Under the bright lights of the New York media, every word Clinton and Sanders utter is up for scrutiny and debate. From Clinton struggling with her Metro Card on the subway to Ohio Gov. John Kasich and his "meat sweats" lunch in the Bronx, no little misstep or comment goes unnoticed.

That includes how thirsty Clinton has seemed to try and prove her New York street cred.

Both Sanders and Clinton are using the New York primary, being held on April 19, to try and take out the other to make a national statement about which one has what it takes to win the White House against Trump, who has proven willing to fight as hard and ugly as possible to win. But whoever wins the Democratic nomination over the summer is going to need every voter solidly behind them to win it all.