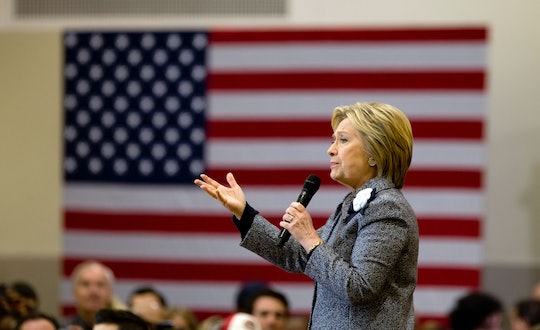 What Happens if Hillary Clinton Wins On March 15? It Would Solidify Her Front-Runner Stance

It's Super Tuesday, the sequel, everyone — strap on your seat belts and get ready for another day of hectic voting. Five Democratic presidential primaries go down on Tuesday in Illinois, Missouri, Ohio, North Carolina, and Florida. The way polls are currently reading it, Vermont Gov. Bernie Sanders will be competitive in at least three states — Illinois, Missouri, and Ohio — since their makeup matches Michigan, where he surprised many when he won last week. His opponent, former Secretary of State Hillary Clinton, is projected to win in the southern states of North Carolina and Florida, and she still leads Sanders by a large number of delegates. So, what happens if Hillary Clinton wins on March 15?

Clinton is currently leading Sanders by 214 pledged delegates, according to ABC, but Sanders has turned out to be a stronger opponent than expected. One of the big questions this Tuesday will be if Sanders can replicate the same big victory he had in Michigan in Illinois, Missouri, and Ohio. Although polls put Clinton ahead of Sanders before votes in Missouri, he ended up winning. Clinton is still fairly far ahead of Sanders, which means she doesn't need explosive wins to become a clear winner.

What Sanders needs, however, is big wins in at least Illinois, Missouri, and Ohio to prove that he could still win the nomination. If he performs poorly this Tuesday, he likely wouldn't bow out of the competition, but he'd probably face pressure to abandon the race from party officials, according to ABC. Clinton would start being treated as the definite Democratic presidential candidate, and further attacks by Sanders could hurt the Democrats in the general election.

According to Slate, Clinton is the favorite in all five states, although by different margins. Even before the March 15 primaries, Clinton won almost 40 percent more delegates than Sanders, not including superdelegates. Once you add superdelegates in (those who can vote at any time up until the convention), things get worse for Sanders — Clinton is backed by 467, while Sanders has snagged only 26.

To stay in the game — or at least, to do so convincingly — Sanders is going to need to pull off a few surprises like he did last Super Tuesday. Don't expect Sanders to drop out if he doesn't succeed, as he has said before that "it is more than appropriate to give all of those states and the people in those states a chance to vote for the candidate of their choice" — but perhaps get used to Clinton being referred to as the Democratic candidate for the general elections.